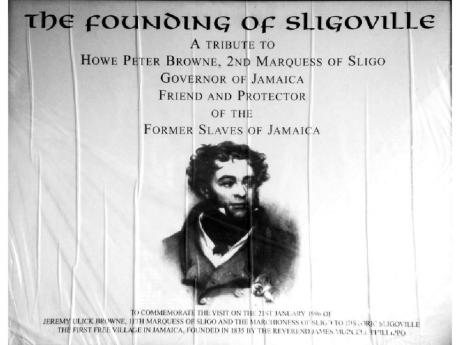 Howe Peter Browne, second Marquis of Sligo, former governor of Jamaica and the person for whom Sligoville was named. - Ian Allen/Staff Photographer 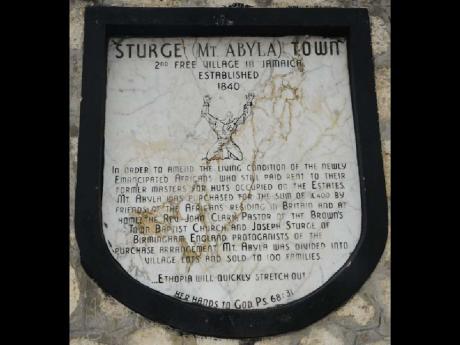 A monument erected in Sturge Town, Jamaica's second free village, which was established in 1840 in St Ann. - Gladstone Taylor/Photographer
1
2

ON AUGUST 28, 1833, the bill for the abolition of slavery in the British dominions received the royal assent. It stated:

The passage of this bill in the British Parliament in England led to the emancipation of slavery in all British colonies, including Jamaica, on August 1, 1834.

To mark this momentous occasion, well-dressed former enslaved Africans (apprentices) flocked their places of worship to give thanks. The streets of major towns were overcrowded with celebrants. A report on the celebrations in the Cornwall Chronicle of August 2, 1834 read in part:

"The established church and chapels in this town were yesterday crowded to excess, and hundreds could not gain admission. The discourse all bore upon the important era which has taken place, and contained much consolatory advice and judicious advice."

The Marquis of Sligo, then governor of Jamaica, in his message to the Negro population stated:

"Take my advice, for I am your friend - be sober, honest and work well when you become apprentices, for should be have ill and refuse to work, because you are no longer slaves, you will assuredly render yourself liable to punishment.

"The people of England are your friends and fellow subjects - they have shown themselves by passing a bill to make you all free. Your masters are also your friends: they have their kind feeling towards you all by passing in the House of Assembly the same bill.

"The way to prove that you are deserving of all this goodness, is by labouring diligently during your apprenticeship. You will, of the first of August next no longer be slaves, but from that day you will be apprenticed to your former owners for a few years, in order to fit you for freedom."

The apprenticeship period, was part of the Emancipation Act. Under apprenticeship, apprentices were to work for their masters for 40 hours per week. In their free time, they could be allowed to work for wages. The apprentices during this time were to continue to enjoy the 'privileges' of slavery these included housing, clothing, provision grounds, food and medical care. Stipendiary magistrates were to be appointed to settle disputes between apprentices and former masters if, and when, they arose.

On August 1, 1838, apprenticeship ended prematurely in Jamaica and the other islands in the Caribbean. Apprenticeship came to an early end because of the humanitarian work of persons such as Thomas Buxton, the anti-slavery party in Britain and the failure of the system itself.

In celebration of Emancipation, Thomas Gardner, a former enslaved African, exclaimed, "I rejoice I am slave no more, and you are no more slave, Jamaica is slave no more. Amen!"

The growth of free villages in Jamaica

Free villages were the outgrowth of full emancipation in Jamaica in 1838. Several factors were responsible for the rapid growth of such villages in the country. These factors can be summarised as the harsh treatment by the plantocracy towards the former enslaved African population. Usually, these factors included low wages and high rental, which sometimes led to eviction from plantation dwelling; and the desire among blacks for individual liberty and land of their own.

The establishment of free villages took two main forms. Some emerged haphazardly when groups of freed individuals came together, or individuals bought land and then subdivided it among themselves. In the second instance, planned villages were established under the well-defined leadership of the church.

The establishment of free villages gave the former enslaved Africans the freedom to explore their newly won rights resulting from emancipation. They now had access to land of their own, free from restrictions and domination of the plantocracy to plant their crops and rear their families. The free villages, in essence, gave the emancipated the first opportunity to explore freedom in the island.

Sligoville is one of several communities which are steeped in the rich cultural heritage of the island. Established in 1835, it was the first of several free villages formed after emancipation. Many of these villages were envisioned and constructed by missionaries of the church who were sympathetic to the cause of the enslaved African population.

The free village is named for Howe Peter Brown, 2nd Marquis of Sligo, governor of the island from 1834-1836.

This is a small historic village in the cool hills of northwestern Manchester; it was originally a coffee plantation. The township was created as Maidstone, a free village, in 1840 by the Moravians to settle former enslaved African displaced after emancipation. The estate comprised 341 acres but when it was purchased it was subdivided into 98 lots ranging in size from 1-15 acres.

Baptist missionary the Reverend John Clark was primarily responsible for the establishment of the free village of Sturge Town. Established in 1839, Sturge Town has the distinction of being Jamaica's second-oldest free village. The town was named in honour of Joseph Sturge, the architect of the campaign against West Indian apprenticeship.

Stony Gut was the home of National Hero Paul Bogle, and the genesis of the Morant Bay war of 1865, which had significant political consequences for the country. It is also one of several independent free villages which emerged after emancipation.

A crisis of labour developed in Jamaica and other Caribbean islands immediately after the end of apprenticeship. This was due in part to the refusal of the former enslaved people to continue working on the estates. To solve this problem, the planters turned to the immigration of indentured labourers. Unlike enslaved people, indentured labourers were contract paid workers. These labourers were usually contracted to work for a specific period of time, usually from one to five years, on arrival in the island.

Apprehension and fears about a declining white population and the effects of emancipation on the labour supply in Jamaica drove some planters to seek white labourers from Europe. There were three main reasons for the importation of white labourers. These were: the belief that white Europeans would make industrious workers, be an example to the blacks, and provide a well-needed white middle class and help to give stability to society.

Chinese immigration to Jamaica started in 1854 with one shipload from the Chinese ports of Namoa and Whampoa. Importation stopped temporally in the same year due to the high morality and the expense involved. The importation resumed in 1858 and discontinued in 1884. During this time more than 11,000 came to Jamaica.

Chinese immigration to Jamaica was short-lived for a number of reasons, including: opposition by the Chinese government due to abuse of its citizens; as well as the fact that the Chinese did not particularly like agricultural work and therefore sought alternative employment away from the estate.