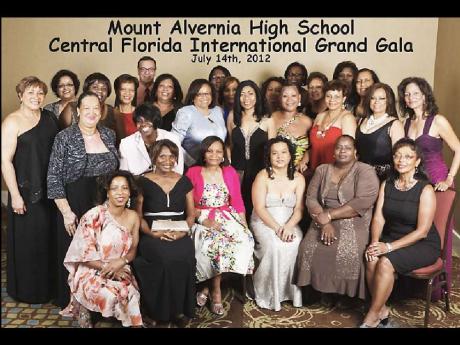 Past students of the Mount Alvernia High School in Montego Bay at a grand gala held in Florida, United States. - Contributed photo

It was a night to reminisce as the roomful of classmates, friends, and families celebrated.

They came from all around the world - from as far as Saudi Arabia and Calgary, Canada, to rekindle friendships, introduce families, and party until the wee hours of the morning.

The 362-strong Mount Alvernia alumnae converged on the Hilton in Orlando/Altamonte Springs, Florida, at the invitation of the Mt Alvernia High Central Florida International Alumnae Association for a grand reunion weekend.

The festivities began on the Friday with a family fun night. Graduates, friends, and their families enjoyed a night of fun, competitions, entertainment, and performances as well as a complimentary taste of appetisers. Generational boundaries broke down as mothers, grandmothers, and grandchildren mingled.

It was the Saturday night, however, that brought out the crowds. There were no empty seats at the gala dinner/dance as alumnae and their partners, dressed to the nines, took part in the silent auction, elegant dining, and late-night dancing. Among the highlights of the night were greetings from past principal, Franciscan sister, Angella Harris.

"The scholarship, education, and building fund are well on their way, and Sister Angella's computer lab is looking more like a reality every day," she said.

A Skype video greeting from the Philippines from past beloved principal Mother Joan Clare stole the night. Many could be seen wiping tears from their eyes as they watched the video tribute of a nun, who many present knew as their principal.

In her address, she apologised profusely for the last-minute change to her plans and noted many times how important the past students were to her. In her own words, Mt Alvernia students were all "A-One."

The weekend ended on a high note with a Jamaican-style Sunday morning brunch,. Every delicacy - from ackee and saltfish to mackerel rundown - was on the menu, to the delight of the attendees.