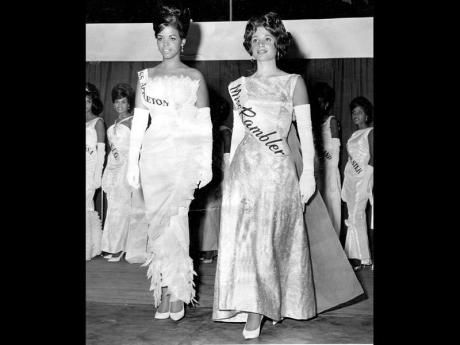 Mitsy Constantine Seaga has been a public figure since 1962 when she was crowned Miss City of Kingston in a contest that, interestingly enough, saw her runner-up being the lovely Shirley Anderson Fletcher, sister to Beverley Anderson Manley Duncan. She was crowned Miss Jamaica in 1964 and later married former Prime Minister Edward Seaga.

Mitsy Seaga played a unique role in the pivotal period, as Jamaica transitioned from a British colony into an independent state and was, in effect, the goodwill ambassador of the 1962 celebrations. She became Seaga's wife at another critical juncture when he, as minister of culture, was establishing the governmental framework and establishments that would become the foundation for the institutions we now deploy and employ in celebrating our history and achievements.

As Jamaica sought its place in a world dominated by the politics of the cold war, Mitsy Seaga came to be regarded as the softer side of the political face of Edward Seaga during his tenure as leader of the Jamaica Labour Party and as prime minister.

History also shows that Mitsy Seaga, as wife of the prime minister, eschewed the role of political activism, opting instead to lead and spearhead a renewal in the culture of volunteerism and social conscience, which saw her leading the charge to provide proper state care for neglected and/or abandoned children, as well as creating opportunities for the underqualified through new programmes and patronage. Being the patron of and establishing the SOS Children's Village in Stony Hill is considered one of her marquee achievements. Another such achievement is the founding of the HEART School of Cosmetology.

As we celebrate 50 years as an independent nation, Outlook shares 10 things you did not know about Mitsy Seaga.

1 Was baptised and christened Marie Elizabeth Constantine, but was nicknamed 'Mitsy' by her aunt as a child, and the name became her signature since.

2 Lost her father when she was seven years old. Raised by her widowed mother, Violet Constantine, who she describes as "an amazing woman", who single-handedly raised her and her sister Ann.

3 Was one of the first 40 girls who attended The Queen's School.

4 Won her first beauty contest at a church fair when she was 13 years old and went on to win Miss City of Kingston in 1962. She was the Queen for Independence.

5 Worked as an usherette as a teenager at The Carib during the holidays, and enjoyed this job as it gave her the opportunity to see all the movies free of cost. She had her first real job at age 17 at the Jamaica Public Service.

6 Worked and lived briefly in London in 1963 in a large supermarket packing groceries. She quit and returned to Jamaica because of the racial prejudices apparent at the time.

7 Wanted to be a flight attendant in order to see the world, but when interviewed by then Minister of Culture Edward Seaga who persuaded her to work as a news presenter at JBC, she did so for a year.

8 A homemaker with a flair for gourmet who loves tasting new dishes, guessing the ingredients and trying to replicate them at home. She also has a passion for flowers and gardening, which saw her taking lessons in Ikebana floral arrangements in Japan with one of the masters.

9 Speaks fluent Spanish and taught herself to play the Quattro (Spanish guitar). She also plays the organ and the piano and loves music and dancing. She is considered a great dancer.

10 Sang publicly only once and it was at a fund-raising benefit (Stars Over Kingston) for her favourite charity, the SOS Children's Village. What did she sing? If I Ruled the World (what a wonderful place it would be ...).