Where would Jamaica be without Michael Manley? 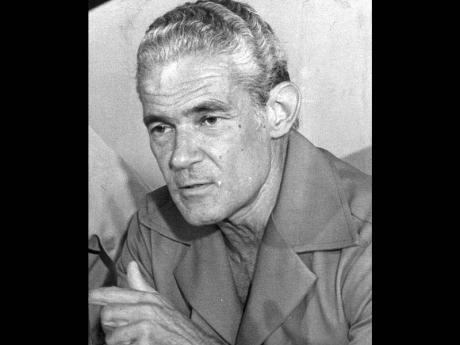 Michael Manley - the prime minister of Jamaica who a Bill Johnson opinion survey indicated was the most popular of all. - File

When Michael Manley died in 1992, a poll published in The Gleaner of March 17, 1997, showed that 67.98 per cent of the Jamaican people believed he should be made a national hero. Up to three years after his death, a poll conducted by the Stone organisation and published in the Jamaica Observer on December 1, 2000, showed that when the people were asked which prime minister had done the most to improve the lot of the people, 54 per cent said Michael Manley.

The popularity of Michael Manley was further captured in a poll which was published in The Gleaner of March 16, 2006, which showed that 49 per cent of respondents said that of the six prime ministers up to that date, he was the best. In that poll, Michael Manley led his nearest rival by 34 per cent.

Based on Mr Seiveright's article, he does not yet understand the futility of trickle-down economic theory and why, after the vaunted six per cent average annual economic growth of the 1960s, Mr Manley was swept into power in 1972.

Despite the annual economic growth of the 1960s, of which Mr Seiveright and others of his ilk continue to boast, very rarely do they mention that during the same period unemployment doubled, and increased migration became the order of the day.

While acknowledging the economic growth of the 1960s, as distinct from economic development, Mr Manley constantly bemoaned the fact that despite the impressive statistics, "too many in our society faced the blank wall of poverty".

Unlike the Seiverights in our confined and sometimes suffocating space, First-World economic experts now have a clearer understanding of the necessity of equality and justice in any rational blueprint for growing an economy out of underdevelopment. To a large extent, they currently share the vision articulated 40 years ago by progressive Third-World leaders like Michael Manley and Julius Nyerere.

MANLEY AND THE WORLD

Manley's progressive thinking in economics also led him to understand that, as a developing country, Jamaica had to be in the forefront of the international drive for equality and justice.

As a consequence, Michael Manley emerged as a world statesman of great authority. He was an avid regionalist who believed in the fundamental principle of Caribbean territories either working together or suffering separately.

He, along with Forbes Burnham of Guyana, Errol Barrow of Barbados, and Eric Williams of Trinidad and Tobago, forged, in the face of strident hostility, a working relationship with the government of Cuba. He also drummed up, despite much opposition, a relationship with Venezuela. We must never forget that the Jamaica Labour Party and others were at the time strident in their opposition to the expanding relationship between Jamaica and Cuba, and Jamaica and Venezuela.

Manley was also a critical player in the drive to create a New International Economic Order (NIEO) that prescribed for the world's nations the same fair play he sought for citizens within the Jamaican society. He also rallied to the cause of the people of South Africa as he passionately opposed racial discrimination, especially South Africa's apartheid.

Mr Boyne, while stating clearly the positives in Mr Manley's political philosophy and governance, also identified, among other negative judgments, "One would need a whole column to delineate his errors and blunders. But there should be no questioning his vision of equality and justice, his quest for participatory democracy, his deep passion for transferring real power to the people, and his unflinching commitment to democratisation at all levels."

Mr Manley himself conceded in retrospect that his 1970s Government had faced serious challenges in its attempt to unite Third-World countries into "a sort of trade union of the poor of the world ... because First-World countries had their own agenda as technology led to increasing globalisation of the world economy".

Michael Manley's third-term prescription for facing the new reality was liberalisation of the economy and privatisation of government assets.

Mr Seiveright's nearly total condemnation of Jamaica's most visionary and transformational leader allowed no room for acknowledgement of the undeniable positives in Mr Manley's governance.

Mr Seiveright seemed eager to blame Mr Manley for every shortcoming under the sun. He, apparently, did not notice that Mr Boyne had quoted the JLP elder statesman, Edward Seaga, who wrote in his book My Life and Leadership: Clash of Ideologies, 1930-1980: "Manley's repeated references to the injustices of being poor and black ... created a significant shift in social awareness."

The Michael Manley Foundation, incidentally, has videotaped interviews with two other high-ranked JLP stalwarts who lauded Mr Manley for his championing the cause of the disadvantaged in our society, and imbuing the Jamaican people with a sense of self-esteem and consciousness of their rights and possibilities. Many of our professionals of humble origin who got free tertiary education under his watch are inclined to say: "If it weren't for Michael Manley ... ."

Enlightened persons in the society now argue that Mr Manley was decades ahead of his time. In doing so, they would usually refer to the raft of legislation to create a more just society, such as the great body of labour laws, the Status of Children Act, the repeal of such unjust laws as the Masters and Servants Act; measures like the Special Employment (Impact) Programme; the National Literacy Programme; the introduction of community health aides, which not only created employment for many of the marginalised poor, but also resulted in the improvement of health standards.

Not to mention the National Housing Trust (NHT), this has been in the forefront of allowing people to own their own homes. If it were not for the NHT, thousands of Jamaicans would still be wondering how to access the keys to their own home. No wonder every prime minister since then, including Mr Seaga, Bruce Golding and Andrew Holness, retained the NHT as part of their portfolio responsibility.

Mr Seiveright decorated his article with some dubious statistics. His time might have been better spent researching such matters, as the statistics of comparative emigration in the decades of the 1960s, 1970s and 1980s; life expectancy, infant mortality and child nutrition in the relevant periods; and the correlation between the controversial Special Employment (Impact) Programme and (a) significantly improved health indicators during its existence, and (b) food shortages alongside increased consumption and imports of basic foods that more poor people could afford while the Impact Programme lasted.

He may also find it useful to investigate the resistance to, and undermining of, the 1970s reforms and the opposition to progressive programmes of that period such as "putting work into Labour Day" and 'Eat What We Grow and Grow What We Eat'.

While at it, he could also research the impact of the G.C. Foster College of Physical Education and Sport, a gift to Jamaica under Michael Manley, from the government and people of Cuba, and, in particular, the placement of its graduates as coaches throughout Jamaica, and especially their contribution to the current global stature of Jamaica in track and field athletics.

If Delano Seiveright undertakes such research with an open mind, who knows, he may be the Seiveright who he is, and not the Seive(wrong) which he has become.

Delano Franklyn is an attorney-at-law and aide in the Office of the Prime Minister. Email feedback to columns@gleanerjm.com and delanofranklyn@gmail.com.