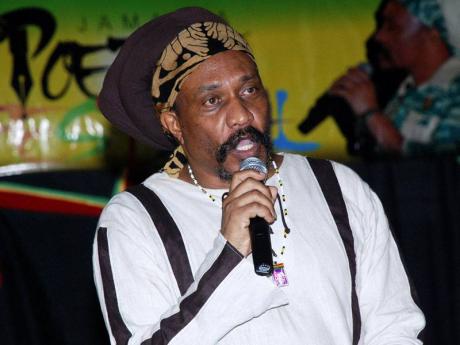 Yasus Afari entertains his audience at The Jamaica Poetry Festival at the Louise Bennett Garden Theatre on Sunday. 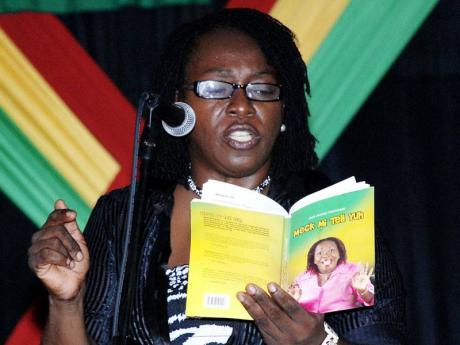 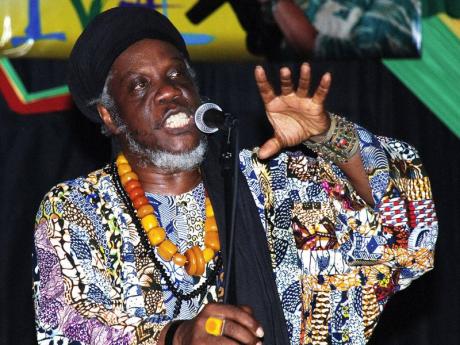 The fittingly tranquil atmosphere of the Louise Bennett Garden Theatre venue was an indicator that there were few other ideal venues for The Jamaica Poetry Festival held on Sunday night.

A moderate-size group of poetry lovers from across Jamaica came out to feast their ears and minds on the works of some of the finest literary artists around.

The opening words from the last performer, the barefooted Mutabaruka.

It seemed as if that formal greeting was enough of an introduction as everybody tuned in to his words as soon as he began reading.

Mutabaruka performed 'How Do You Sleep'. Before though, he used the ever popular 'I Am De Man' to revisit past events such as the Coral Gardens incident in Montego Bay and, by extension, the bigger picture, the abuse and hardship suffered by Rastafarians during that period.

Entertaining the audience with his renowned wit between each poem, the thought-provoking 'Dis Poem' was his last.

Yasus Afari came to the stage saying "I pen mightier than the sword" as "we have to write, because if yuh nuh write, yuh wrong".

Afari opened with the lines "yuh know that I'm black and mi have the magic, suh di people dem a call mi ras black magic", which come from the poem 'Black Majik'.

Soon after, Afari created a poetic mosaic in an effort to show the versatility of the poet and their vocal ability through not an ode, but "a wail, to our ancestors".

'Meditate' followed, and though there was uncertainty about whether or not he would do his popular poem 'Complex' — someone wanted him not to — he ended up performing it, much to the delight of the audience.

'Work' got the audience fully involved, many shouting "Work!" where it was needed, as Afari pointed the mic in the audience's direction.

Throughout Joan Andrea Hutchinson's performance, she kept open conversations with the audience.

In 'Fraggle' she took a jab at the mistakes that are present when Jamaicans tango with the English language.

The female importer she portrayed voiced her displeasure that although 'fraggle' was written on the box in red and with "di big big underline", the handlers failed to 'handle with care' the fragile goods.

In 'Town Is Not For Me' she wittily pointed out the environmental hazards of urban areas versus what pertains in a rural environment from the viewpoint of a vulture.

She reminisced on the happenings of hurricane Gilbert before sharing how 'Ivan Lef Mi Inna Grief'.

'Tenky Miss Lou' served to pay tribute to the iconic Jamaican personality. That wasn't the only form of tribute, as a few other poems about "the pocket rockets" were for Jamaica's Olympians.

She closed her set with words of encouragement about the need for Jamaican traditions to be passed on to the younger generations by the elderly.

Throughout the night, performances from persons such as Professor Fred Hickling, Wayne Chen, Akinsanya, Osakwe, Kai Falconer, Ras JaJa, FuZion, Richie Innocent, Steppa and K'Shema Francis were among many which were well received.