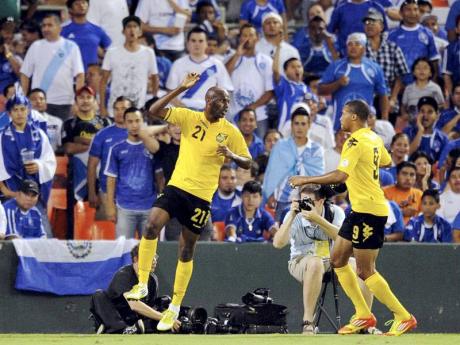 Jamaica's Luton Shelton (left) celebrates the first of two goals against El Salvador with teammate Ryan Johnson during the first half of an international match yesterday.AP

Two goals by striker Luton Shelton, one in each half, were good enough to push Jamaica to a hard fought 2-0 win over El Salvador in a friendly football international last night at RFK Stadium here.

The Reggae Boyz survived several scares before carving out the win in the first of two matches being used this month to prepare Jamaica for back-to-back World Cup qualifying ties against the United States in early September. Jamaica play Kenya in Hartford, Connecticut, on August 25.

On a warm and uncomfortably muggy night in the US capital, Jamaica opened with a 5-2-3 formation, a sharp departure from the 4-4-2 featured in their first two World Cup qualifiers (WCQ) against Guatemala and Antigua and Barbuda.

Whether head coach Theodore Whitmore was deliberately disguising his intentions from CONCACAF semi-final round WCQ group rivals Guatemala, which played to a 3-3 draw with Paraguay in the curtain raiser of last night's double header, or merely exposing the Reggae Boyz to a new look, is unclear. However, following Jamaica's new ambassador to Washington Stephen Vasciannie's introduction to the teams, he started captain Shavar Thomas at sweeper with Dicoy Williams and Jermaine Taylor as the other central defenders. Andrae Campbell stepped in on the left flank with Lovel Palmer, the only starter from the defensive unit in the recent WCQ, on the right. Damian Williams and Je-Vaughn Watson occupied central midfield roles with the trio of Omar Cummings, Luton Shelton and Ryan Johnson listed at forward.

El Salvador countered with their own 3-5-2 formation, listing five players in midfield at the outset.

Despite spending large stages trying to figure out marking assignments, and in the process surrendering huge chunks of possession and space, it was Jamaica which drew first blood in the 16th minute. Shelton collected a pass from Johnson on the left side of the penalty area, easily dismissed his marker and curled a beautiful left footer inside the near post of El Salvador's goalkeeper Ricardo Jerez to give the Boyz a 1-0 lead.

The goal raised Jamaica's confidence and they came close to scoring several times, including a miss by Johnson, who, sent clear, lofted his left-foot shot over the crossbar. But El Salvador had their opportunities too, forcing Jamaica's goalkeeper Dwayne Miller into a couple of crucial saves, the best of the first half when he lunged far to his left to keep out Eliseo Quintinilla's curling free kick.

El Salvador missed a glorious chance to equalise early in the second half when Quintinilla's pinpoint cross found striker Lester Blanco totally unmarked in a sea of Jamaican defenders. But he headed wide of the post from less than 10 yards with Miller at his mercy.

Darren Mattocks made his senior debut for Jamaica in the 55th minute, replacing Cummings, while O'Brian Woodbine returned as a 60th minute sub for Campbell. Mattocks immediately showed why he has become a highly touted rookie in Major League Soccer, weaving by a couple tacklers with his first touch and forcing Dennis Alas into a clumsy foul, earning El Salvador's captain a caution. Watson, Campbell and Johnson also picked up yellow cards as the game occasionally got testy.

Shelton notched his and Jamaica's second score in the 66th minute, heading home a wonderful cross to the far post by the hard-working Johnson on the left flank. The striker was replaced shortly after by midfielder Ewan Grandison as Jamaica tried to secure their advantage.

Still, the Boyz lived on the edge. Quintinilla, again given too much space, fired hard and low, but Miller dove to his left to pull off a fine save. Later Thomas's sliding block hit his own upright.