What modern America is all about 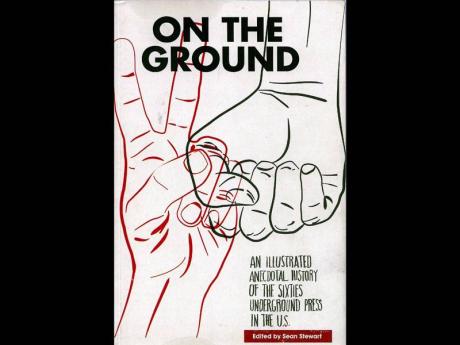 Title: On The Ground, An Illustrated Anecdotal History of the Sixties Underground Press In the US

This book, edited by a scion of the Jamaican Kennedy clan - though he prefers to be acknowledged on his individual credits - was given to me by a media colleague who knew that I had graduated from the University of California at Berkeley in 1969, hotbed of student radicalism in the '60s, after meeting my future husband upon my arrival there in 1965.

Yes, can you imagine Dhiru Tanna giving a rousing speech on behalf of the movement against colonialism on the steps of Sproul Hall? But he did, and we both took the student movement at Berkeley in our strides as part of our education. We were global before most people knew what was entailed in that term.

But what my colleague here didn't know was that although I started high school in a segregated town in Indiana, and then became the first American to ever attend the Shia Imami Ismailia Secondary School in Kampala, Uganda - a Muslim school for those of you who aren't up on your Islamic terminology - I also ended my secondary school education at Friends Seminary - a private Quaker New York school where most of the students were Jewish or Episcopalian - while living in Greenwich Village, so that between Berkeley and the Village, while helping to edit The Journal of New African Literature and the Arts (JONALA) while in California.

I can probably appreciate Sean Stewart's book better than most people in Jamaica or, for that matter, in the United States of America. Now, normally, I take a very low profile, usually eliminating myself from interviews to the extent that most people don't even realise those which I have done. But in this case, I want you to know that I am qualified to tell you that this is a brilliant book.

One of my Jamaican friends in Miami picked it up and was mesmerised by the posters and magazine covers from the '60s' underground press reproduced in On The Ground.

Unfortunately, for copyright reasons, we can't reproduce them for you here, but what Sean has done is to research the publications which were instrumental in fomenting the fight for human rights, whether they be against the war in Vietnam, or discrimination against people of colour, or discrimination against women or those whose sexual orientation is not that of most others. The underground press started on the former, but over the years, showed the way towards the liberation of all others.

Now Sean Stewart, born and raised in Kingston, then having migrated to North America, appreciated that in these small local presses, in some cases no more than mimeographed handouts on street corners, herein lay what press freedom and social progress is all about.

His editing takes a little time to grow on the reader, but it is useful. He selects excerpts from interviews with, or writings by, various underground editors or authors - whether they be Jewish high-school students, middle-class Midwesterners or members of the Black Panther movement - and isolates them into subjects within chapters.

After a while, you get to know the different personalities and move with the times and the themes that Stewart has selected. In so doing, he creates a superb history of America at one of its most stimulating periods of political and social growth. Anybody wanting to understand what modern America is all about should read this volume.

It's not always easy. Some of it is disconcerting, discombobulating for those not familiar with this decade, but persevere. You will start to grasp what motivates the baby-boomer generation that now holds sway in positions of power, or that motivates those who resent the potential liberalism represented by the ideas put forth in the underground press.

Paul Buhle in his preface proclaims: "We changed journalism, battled repressive laws" and they had fun in the process. Jamaicans should especially appreciate this book because it speaks to individuality, neither conformist nor non-conformist. It deals with the sacredness of human life, examines the moral courage of direct action during the civil rights movement, and illustrates how journalism became a lifestyle of total immersion, both political and cultural.

I have pages of quotations of relevance from this volume, too many to share with you here. For example, this quote from Ben Morea, of Black Mask, The Family, which illustrates the power of music, something Jamaicans understand, and these were free concerts.

"There was a certain cultural antagonism between the ghetto-dweller and the youth, the hippie. They didn't quite have the same background, so our role was always to try and ease that tension ... . We'd have black bands or steel drum bands, rock bands, and Latin bands all playing together so the audience would be all three. I mean that was our goal, it was conscious. We would try to bring together art and politics or ghetto and hippie - we were always trying to bridge gaps."

On The Ground, available on Amazon.com, is probably going to be difficult for you to find in a local bookstore, but look for it, read it, and appreciate how Jamaicans of all backgrounds contribute to understanding our global culture and how it has evolved.