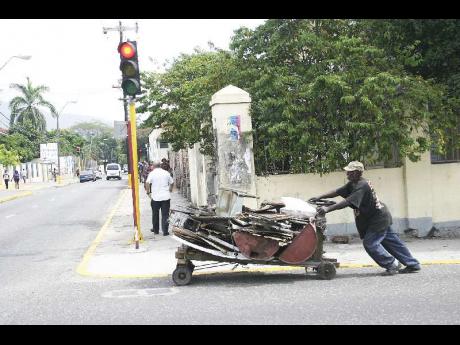 In this February 3, 2012 Gleaner photograph, a man pushes a handcart laden with scrap metal along Duke Street, Kingston. Indications that the scrap metal trade may resume soon have triggered a wave of criticism islandwide. - File

I had a nightmare that the country was on the verge of a great economic boom when the major highways, bridges, edifices were suddenly robbed of the supporting metal in their foundations and structure. It was frightening, because I was leaving Junction, singing 'Georgia on my mind', driving across the Westmoreland Bridge heading into Highgate, when I woke up.

The reality was worse because when I woke up, there was a high but no gate. Add to that the fact that, in the deep sleep, the sounds of the garbage collectors banging the 'drum pans' were a welcome one, given that, for some strange reason, the agency was a solid waste of time, and the nightmare deepened. Yet, the rumblings of the garbage truck sounded a little too soft and the throttle of the engine was too hurried. Outside I walked, and in my sleepy state it did not occur to me that I had not opened the gate, or unlocked it for that matter.

There was no need to because the gate, the oil drum and his twin brother were making an exodus like truants from school, precariously perched on the gate. My gate that my father struggled with slave wages to put on the little scheme house he bought from the developers who sell overpriced little boxes, which are so small, one has to go outside to change his mind.

Three men, looking surprisingly like the rusted metal they associated with, were making off with the gate, drums and other assorted metal extrusions. Some of the loot included government and other public property. But I must admit that in my own selfish and bigoted state, I had no interest in manholes or their covers.

Try as you may, the scrap metal trade is a real nightmare for the business sector, the ordinary citizen and the politician. Minister of Industry, Investment and Commerce, Anthony Hylton, is the MP for the constituency comprising Riverton City, where the largest amount of the trade is located. It is not an easy decision to restart the trade as he diligently promised, or to leave it suspended.

First of all, St Andrew Western is so safe a seat, its major commodity could be latex instead of scrap metal. The last time the Jamaica Labour Party (JLP) held that seat was between 1983 and 1989, and that was simply because Michael Manley's People's National Party (PNP) made the stupid decision to abdicate Parliament to the JLP to protest the use of an outdated voters' list.

Hylton's last victory saw him getting almost 70 per cent of the votes in December 2011, and in some divisions such as Riverton Meadows, Callaloo Mews, Balmagie and Brooke Valley, the figures are way up in the 90s. In the past, higher percentages, which challenge my basic mathematical skills, have been recorded for some areas. Simply put, even if Hylton tries very hard, he is unlikely to lose the seat.

Central to all of this is Riverton and Callaloo Mews, whose residents have among the highest levels of poverty and underemployment in the country. Faithfully loyal to the PNP, these residents will never, in my opinion, mark an X beside the bell, unless it's is for a member of Jackie or Bertis' family. Therefore, like the aforementioned Valley, although they have little to show for their decades of fealty, the MP can push the envelope with the guarantee that while it might result in a loss of popularity in the general election - not due till 2016 - they won't vote against him. Hylton can make an extremely unpopular decision and get away with it. In doing so, he can stand by his guns, fire the cannon and still have balls remaining.

On the other hand, his colleague parish councillor, Kevin Taylor, is caught between a scrap and a hard place. He presides over the Duhaney Park division, which has the neon orange Brooke Valley. True, the votes from Valley are 'many, many', but the counterpart, Sherlock Crescent, and its environs vote exclusively green. Furthermore, a large part of the community is politically uncommitted. Many residents from Duhaney Park do welcome the resumption.

Stories such as that which I narrated at the beginning of this column are not simply dreams. Since word got out that the trade was on the verge of recommencing, anecdotal and real evidence has come forward about the loss of signs on Highway 2000, and manhole and water meter covers in Kingston, St Andrew, St Thomas and St Catherine. Reports have been made, and some I have seen myself.

To top it off, we might believe that the preacher is lying, but a historical crucifix was stolen from the St James Parish Church last week. Some sacrilegious miscreant, who could have used the aisle in the back to pray, chose to prey instead. The stolen relic demonstrates that there is a lot of crosses connected to the business.

The Jamaica Public Service Company has lost around US$2 million and the replacement and security costs could push it up to US$5 million. And like the courts recently decided, it has no monopoly on this either. Right behind it, the National Water Commission suffered US$5 million, and combined with Digicel and LIME, the fallout approximates US$12 million.

Thieves on the move

Whatever the spin by the interest groups, the thieves are active. Furthermore, some thieves are also robbers, who will replace your metal with 'hot lead'. Understand this! The displaced scrap metal workers could be lured into crime, but if individuals are robbing and stealing to feed the trade, is this not worse?

Nonetheless, the minister did promise a resumption of the trade, although it seems it is likely to disenfranchise some independent operators who do not generate scrap metal. The modalities have to be worked out, because it potentially is a major source of foreign exchange.

The world is as hungry for scrap metal as it is for illegal drugs. It is big business, assessed to be worth more than US$80 billion, and reportedly employs more than 14,000 persons locally. If this is true, this means that it can make a serious dent in the unemployment rate, which is the highest it has been since the 2000s.

On the other hand, losses to the nation, in terms of the replacement cost for railroad tracks, bridges, railing, water pipes, telephone cables, stolen motor vehicles and my pan that I use to feed my dog and bitches, are worse than we think.

Far more Jamaicans are worried that the criminals will not only saw off their burglar bars but take the entire grillwork. The Caribbean Policy Research Institute of the University of the West Indies has outlined a 10-point approach to the problem, and it is worth looking at. Individually, we might have to use plastic rubbish bins, fibreglass street signs, wooden gates bolted with metals and concrete cesspit covers. Simply put, we just have to become even more vigilant.

Government has to find ways of allowing the small person to 'eat a food', but it has to be regulated more tightly. This includes use of tracking technology, centralising of exporting sites, and major penalties for delinquent exporters who buy or sell stolen property.

Right now, I am not convinced that the Government can exercise the kind of control that is needed. So, inasmuch as the dealers are suffering and many persons are wondering how they will fund back-to-school, haste makes ... scrap metal.