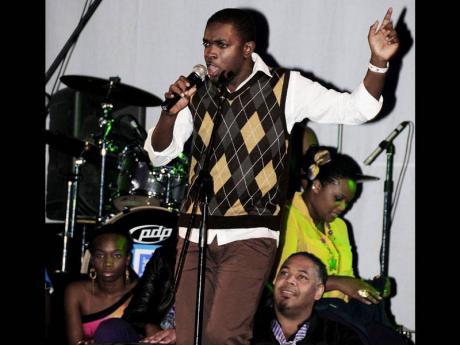 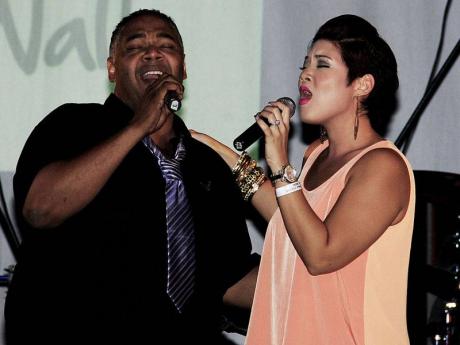 Michael Sean Harris and Tessanne Chin belt out the notes 'Somebody That I Used To Know' during the Gungo Walk Music and Arts Festival 2012 concert at the Edna Manley College of the Visual and Performing Arts on Saturday. - photos by Winston Sill/Freelance Photographer
1
2

The event was expected to display the dynamism and versatility of Jamaica's music and it did.

The performances began when headliner Harris delved into his set accompanied by his band.

The stage was decorated like a living room decked out with sofas courtesy of Singer. Harris said the setting was done in that way to create a connection with patrons.

"I will even share a few stories with you every now and then," he said, during his performance.

He then sang singles such as You Have Taught Me How to Love and In Your Presence, for which he got good responses from the audience.

His poems provided social commentary, pointing out inequality as a major problem hampering development in Jamaica.

"For me, poetry is more than just entertainment but social commentary and education," he said.

After McLaren's loud, entertaining and informative set, he exited the stage to resounding roars of approval from the audience.

Harris and his band picked up from where McLaren left and kept the momentum alive by performing a rendition of Junior Reid's One Blood.

Members of the audience could be seen bopping their heads while others sang along.

Gungo Walk hit its climax when Harris sang Somebody That I Used To Know by Gotye and Kimbra. During the performance the lights went dim and reggae artiste Tessanne Chin appeared from the darkness to join Harris.

The patrons loved the vocal display of the two singers and at Tessanne's first attempt to exit the stage, patrons could be heard screaming "we want more".

She then returned to perform her single Hide Away, immediately transforming the venue into backup singers.

Following her performance, up-and-coming roots reggae band Di Blueprint took over and piloted the event to its closure.

The band gave a unique performance, using voice syntheses along with their natural vocals, a feature which is very uncommon in live performances locally.

The band performed songs such as I Can't Breathe and Baby Boo.

The ladies could be seen singing along with the band through their entire set.

The artistes were joined on stage by a scantily dressed female dancer who gave a vivid display of what it means to dance on the Table Top.

There were roars of approval from all corners of the venue at the sight of her acrobatics.

Gungo Walk was a Jamaica 50 endorsed event and according to Harris in a previous Gleaner interview, the event would be expanded in years to come.

"The aim of this is to have a platform for people who are doing different types of Jamaican expressions in music and arts. I can see us in the future bringing people from other Caribbean islands and countries to be part of this," Harris said.