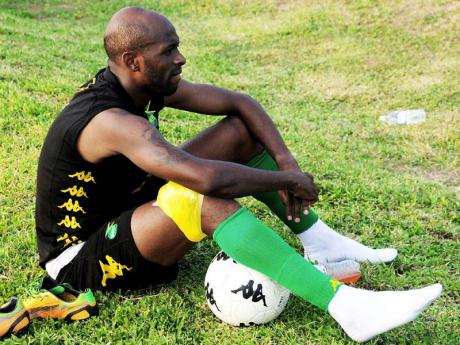 Ace forward and the country's leading goalscorer, Luton Shelton. He will be a key man for the Reggae Boyz this evening.Photos by Winston Sill/Freelance Photographer 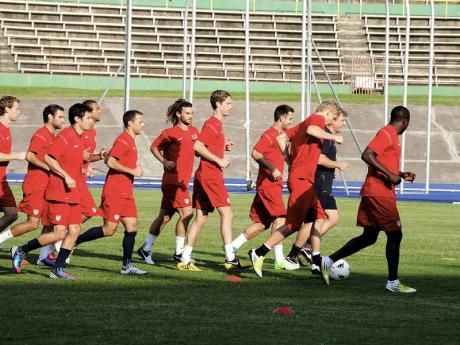 The United States football team having a workout at the National Stadium yesterday, ahead of today's crucial CONCACAF World Cup qualifier.
1
2

There will be plenty at stake when Jamaica's Reggae Boyz tackle the United States (US) in a crucial CONCACAF World Cup Qualifying (WCQ) semi-final Group A match at the National Stadium with kick-off set for 7 p.m.

Jamaica and the US have amassed four points from their previous two group games, but the Americans have a superior goal difference and this match, to be followed by a return game next Tuesday, will go a far way in determining which team ends up topping the group which is completed by Guatemala and Antigua and Barbuda, who have on a point each.

The teams have previously met in 18 competitive fixtures, which have not yielded a win for Jamaica, as the US have won 10 of the encounters, with the remaining eight ending in stalemates. The Americans are, however, still seeking a victory over the Reggae Boyz in a World Cup qualifier at 'The Office'.

In their three previous World Cup qualifying meetings, two games ended 0-0 and the other 1-1. The last time the teams met, in the 2011 Gold Cup at the RFK Stadium in Washington, the US won 2-0.

"When you go into any office, the boss is in charge, so that's how we got the name 'The Office'. We are hard to beat here and we want to maintain that," Whitmore told The Gleaner on Wednesday ahead of the team's training session at the National Stadium.

"We are confident and ready to go. We are prepared to do the job Friday night," he added.

The Reggae Boyz, now ranked 60th after moving up six places in the latest FIFA rankings released on Wednesday, lie 27 places below their American counterparts, who moved up three places to 33rd.

"We have to play well, we have to organise, we have to keep the ball and take our chances," Whitmore shared. "We would welcome victory against this US team … and I think that would make a difference going into the return game," he added.

Jamaica are coming off a 2-0 friendly win over El Salvador with the country's all-time leading scorer, Luton Shelton, netting both goals. The US on the other hand created history in their last outing, defeating Mexico for the first time at the Azteca Stadium.

"We are eager to prove a point tomorrow night. We understand the history is that the US have never won a World Cup qualifier in Jamaica and that's what we would like to do," Klinsmann said at a press conference held at the Jamaica Football Federation headquarters yesterday.

"We are coming here to give them (Jamaica) a real game and we want to win this game," he added.

Klinsmann is aware of the significance of the game to Jamaica, especially in this our 50th year of Independence.

"We also understand that Jamaica are very eager to win the game as well; it is a special year for Jamaica," Klinsmann stated.

"We have the highest respect for Theodore Whitmore's team, but we have a goal here, and we have a real clear idea of how we want to approach things," he added.

"We have speed all over the place as well - if it is in defence, if it is upfront, if it is in midfield - so we are going to hope not only to match the speed, but also to top certain areas from our end," Klinsmann shared.