Dempsey focused on task at hand 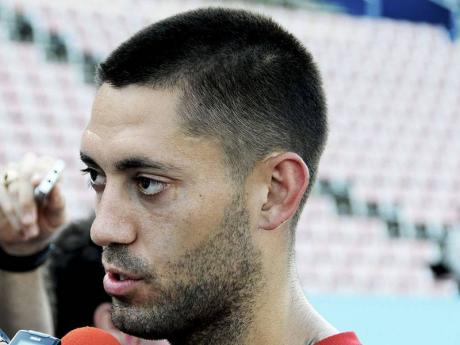 With the saga surrounding his transfer from English Premier League club Fulham to Totten-ham Hotspur firmly behind him, Clint Dempsey is now focused on helping his national team to secure victory over Jamaica in this evening's World Cup qualifier at the National Stadium.

Dempsey spent five and a half years at Fulham, last season scoring a team-high 23 goals in all competitions and was for the second consecutive year voted the team's top player. He completed an agonising transfer to Tottenham just before the transfer window closed.

He has, however, not yet featured for his new team and, in fact, has not played a competitive match since June, when he scored in the Americans' last qualifier, a 1-1 tie with Guatemala.

"It is good to have that behind me now and I am looking forward to the future," Dempsey told journalists ahead of the USA's training session at the National Stadium. "I am excited about the qualifiers coming up with the US team, but also excited about the opportunity of playing with a team like Tottenham and working hard and breaking into the line-up," he added.

Without a competitive match for three months, there is the likelihood that Dempsey might not be able to last for the duration of the game.

"Whatever they call me to do, I will be out there as long as I can and do the best that I can do," Dempsey said.

The 29-year-old, who can play in the middle of the park or lead the attack, is anticipating a very difficult encounter.

"Anytime you play any team on their home soil in a World Cup Qualifier, it is always difficult because they got the fans behind them and they are fighting for an opportunity to be in the World Cup," Dempsey reasoned. "It is a good team; they (Jamaica) have players who are playing in a lot of different leagues; some in Europe, some in MLS (Major League Soccer) and they are a very athletic team, they have quality and it is going to be a tough team to break down," he added.

The last time Jamaica and the US met, in the quarter-finals of the 2011 CONCACAF Gold Cup, Dempsey scored one of two second-half goals to give the US victory.