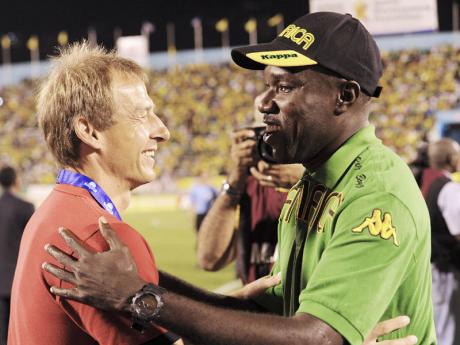 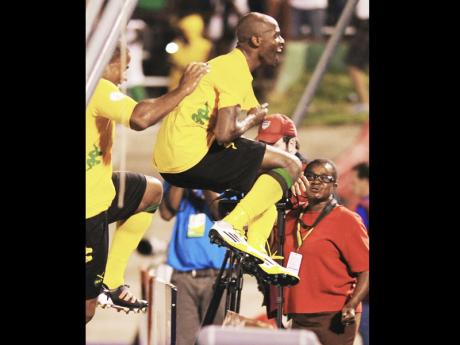 Jamaica's captain Luton Shelton is overjoyed after scoring the free kick which turned out to be the winner against the United States in the CONCACAF semi-final round World Cup qualifier at the National Stadium last night. -Ricardo Makyn/Staff photographer 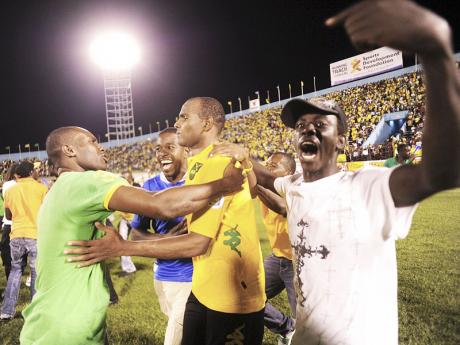 Goalscorer Rodolph Austin is mobbed by supporters at the end of last night's game which saw Jamaica's senior Reggae Boyz earn a historic 2-1 win over the United States.
1
2
3

In the year when the nation celebrates its 50th year of Independence and after 19 tries, Rodolph Austin and Luton Shelton struck contrasting free-kick goals in each half to hand Jamaica their historic win, a 2-1 World Cup qualifying result.

From near 30 yards, Austin powered home his kick in the 24th minute that sped along the turf and past the wall to beat the diving American keeper Tim Howard inside the far post; while Shelton, in the 64th, perhaps benefiting from the expectancy of Austin's booming tries earlier, spectacularly curled his free kick, from near 22 yards, over the wall and well beyond the reach of the diving goalie.

Clint Dempsey had earlier scored a tap-in goal for the United States in the first minute, which stunned the Jamaican team and its near 25,000 supporters.

Scenes of wild celebration greeted the final whistle, with hundreds of fans scaling the perimeter fencing to celebrate the famous win with their heroes on the pitch, rekindling memories of the Reggae Boyz's historic World Cup Finals qualification for France '98 when the team's current head coach, Theodore 'Tappa' Whitmore, was a player.

sealed in 'The Office'

Their qualification then was also sealed inside the National Stadium, which the Reggae Boyz have grown to call 'The Office' because of the manner in which they have dominated opponents on its turf, during the France campaign and onwards.

The three points garnered from the win catapulted Jamaica to the top of Group A on seven points after winning two and drawing once in three matches of this quadrangular elimination series that promotes two teams to the CONCACAF Finals that will include six teams. The Americans who the Reggae Boyz will again meet on Tuesday in Columbus, Ohio, remain on four points. At the outset, it was actually the US which put themselves in pole position for zone leadership, as the homesters made a horrible start, on the back of a horrendous defensive mistake by centre half Adrian Mariappa.

The US controlled possession from kick-off, playing mainly safe passes at the back before making a couple probing passes. Maurice Edu attempted to dissect the central and wing defenders with a pass to Herculez Gomez that Mariappa intercepted. However, the defender was dispossessed in the penalty box, leaving Gomez with a clear chance to score. He took two shots, which were charged down by goalkeeper Dwayne Kerr and Nyron Nosworthy, who did some risky defending on occasions. On the second rebound, Gomez passed inside for the unmarked Dempsey to place the ball safely into the goal from four yards.

The US' style was consistent throughout, as they worked a team passing game, largely attempting to expose the Jamaican defence by dissecting the central defenders and fullbacks, especially on the flanks from where they would serve in crosses.

Jamaica's was more direct and included more individualism, even though Je-Vaughn Watson - who hardly put a foot wrong for the entire night - Austin and Jason Morrison were playing at a level in the first half which enabled them to establish a real sense of danger.

It never quite materialised into clear-cut openings, but more through booming drives from distance from Austin, who hit about 10 tries on goal for the night.

Little surprise it was that he scored, with one of probably two hits that went below the crossbar.

The US got a clear chance to regain the lead at the 44th minute when Maurice Edu was fed a grounded cross at six yards by Gomez. But his feeble finish was saved by Jamaica's goalie, Dwayne Miller, diving to his left.

Jamaica were out of the blocks like its Olympic women's 100 metres champion, Shelly-Ann Fraser-Pryce, in the second half, peppering the US goal area with shots and earning a series of corner kicks.

They continued to press forward and finally made the Americans pay for a series of fouls in dangerous areas just outside the goal area when Shelton produced a gem of a free kick on a move where he had actually earned the foul when brought down from behind.