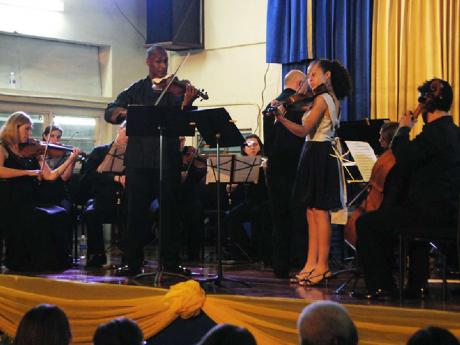 Jamaican solo violinists Steven Woodham and Naomi Reitzin play with the Royal Philharmonic Orchestra during the latter's performance at the Northern Caribbean University on Thursday evening. - Photo by Dave Lindo 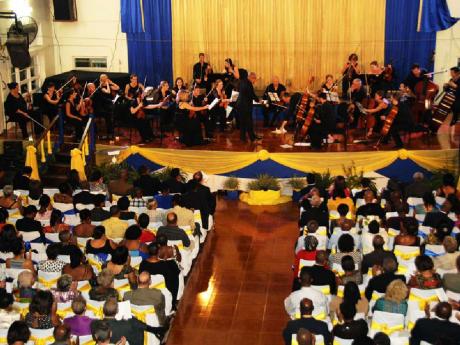 Local composer Peter Ashbourne conducts as the Royal Philharmonic Orchestra plays some of his compositions during a presentation at the Northern Caribbean University on Thursday. - Photo by Dave Lindo
1
2

The Royal Philharmonic Orchestra came to the cool hills of Mandeville and gave a performance of the highest standard that will long be remembered by the people who travelled from near and far to witness it.

The event, organised by the National Youth Orchestra of Jamaica, was held at the Northern Caribbean University campus on Thursday and was the first of two concerts in Jamaica by the London-based orchestra.

Classical music aficionados came out in their numbers to witness this historic occasion as it was the first time the world-renowned orchestra was performing in the Caribbean.

As the orchestra, with conductor Benjamin Pope, started off the evening with the playing of the national anthem, it was evident that great things were to come - the audience was already spellbound

The orchestra got down to business and had its audience in awe as it played the popular Wolfgang Amadeus Mozart's Serenade No. 13 for Strings in G Major.

Audience in a trance

The 30-strong orchestra seemingly sent its audience into a trance as it delved deeper into the second movement - Romanze; followed by the Menuetto, closing with the Rondo to thunderous applause.

The orchestra was joined onstage by Jamaica's own gems in the well-acclaimed solo violinists Steven Woodham and the very promising 14-year-old, Naomi Reitzin.

Soloists and orchestra gave a glorious performance of Johann Sebastian Bach's Concerto for Two Violins and Strings in D Minor, also known as the Double Violin Concerto. There was a sense of pride as the audience witnessed the eloquent dialogue between Woodham and Reitzin. It showed that Jamaica was truly a blessed country for having gifted musicians who can stand with the best.

Woodham joined the orchestra to play Méditation from the opera Thaïs by Jules Massenet. Woodham's artistry left its mark on the audience.

There was poignancy and depth in the interpretation of the three movements - Vivace, Largo ma non tanto, Allegro - of the Double Violin Concerto.

One of the crowd's favourites was a Jamaican folk composition by Ashbourne played sweetly by the orchestra.

The orchestra ended on a high, surprising its audience with a composition which fused Mozart with songs from Bob Marley in a tribute to the musical legend.