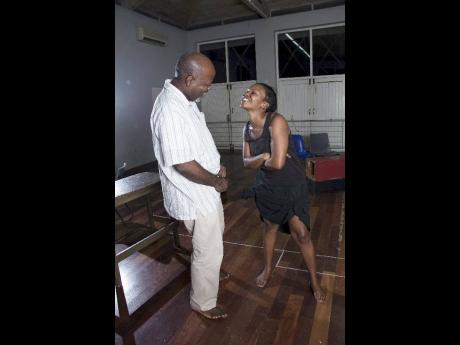 Len and Pearl: Devon Yetman as 'Len' and Keniesha Bowes as 'Pearl' rehearse a scene from 'Old Story Time'. Contributed 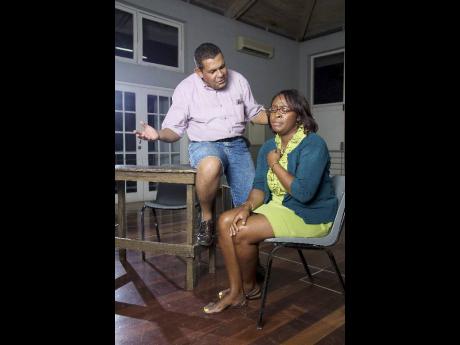 George and Lois: Michael Forrest, as 'George' and Patria-Kaye Aarons, as 'Lois' during a rehearsal for 'Old Story Time'. - Contributed
1
2

Winston 'Bello' Bell in the role of 'Pa Ben' and Dorothy Cunningham as 'Miss Aggy' lead a vibrant cast of actors in the Sydney Reid production of the Trevor Rhone classic Old Story Time, which opens at Stages Theatre, in New Kingston, on October 5.

Director, Eugene Williams, director of the School of Drama at the Edna Manley College of the Visual and Performing Arts, says the cast has become a tight ensemble, subtly playing off each other, as they weave their way through the nuances of the episodic drama about Miss Aggy, who has charted a future of advancement for her son Len, through higher education.

He points out that Rhone's play provides "iconic representations of the internalisation and vicious legacy of the prejudices of race, colour and class; and, the indomitable strategies of the peasantry to overcome these obstacles."

Bell, who is playing Pa Ben for the second time around, brings a wealth of theatre experience, which spans 35 years.

He has performed in Whiplash, Stop That Train, Ship to Zion, and others; several movies, shows on television, and was part of the comedy duo, Bello and Blacka.

He commands the flow of events as the storyteller, and "seasons the drama's brew with proverbs, folk phrases, interacting with cast and audience".

"I did a dreadful tryout for the role of Miss Aggy at the casting for the original production of Old Story Time," Cunningham, a theatre stalwart, says.

However, this time around, she welcomes being able to play this role at a professional level.

Since her tryout, Cunningham's long-term television role of 'Miss Zella' on Lime Tree Lane, and numerous performances, including Not About Eve, Office Chase, Positive, and Second Chance, honed the acting skills she brings to Old Story Time.

While Devon Yetman, in his own words, "is a newcomer to commercial theatre," he assumes the role of 'Len', Miss Aggy's son, with confidence; and deftly grapples with the mother-and-son conflicts.

A freelance news presenter and producer with RJR 94 FM, Yeman's previous theatre experience includes performing in Children of the Dust, in the 1989 Tallawah Drama Festival at The University of the West Indies.

Her theatre roots go back to playing in Cindy and other productions.

Forrest attended the Edna Manley College of the Visual and Performing Arts and City College in New York; and currently teaches drama.

Over the past three decades, he has played in many productions, including When the Cat's Away and Bedward, as well as several television dramas.

In this production, Forrest portrays the student, banker and Ponzi scheme operator who muddies the lives of: Len, through his deeds at Munroe College; Lois, on the job; and Miss Aggy, who he cons with his investment scheme.

Keniesha Bowes, who plays 'Pearl', says, "Eugene is not only a director, but a teacher", who took her back to the "drawing board of acting, helping me not only to recite lines meaningfully; but actually take on the role by living, breathing and being Pearl".

A graduate of the Edna Manley College, Keniesha played the 'vivacious dancing helper' on the popular Jamaican soap opera, Royal Palm Estate, and says, "Shows such as Lime Tree Lane, Titus and Oliver-at-Large influenced me to become an actor."

She has also acted in When the Cat's Away, Wine & Roses, Positive, Moon River, and Tick Tock.

Jamaican folklore and rituals permeate the fabric of Old Story Time; but, as Williams opines, "The overriding statement of this drama; and, indeed the primary focus of this production, is the importance of family, community and nation in contemporary Jamaica, where old obscenities are masquerading in new masks."

The sets for Old Story Time are being designed by Ron Steger, a teaching and design award-winning theatre professional; and Professor Emeritus of Wyoming University, who currently lectures at the Edna Manley College.

The stage manager for the show, Evone Walters, is a graduate of Edna Manley College, who provides the glue in the production and maintains the unity between cast and crew.