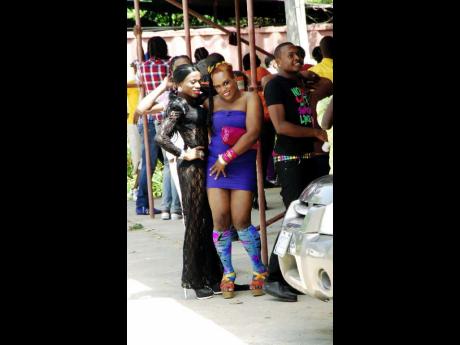 It is not unusal to see men on the streets of New Kingston at nights dressed like these two, who were seen in St Ann recently. - File

Uncontrollable gay men wreaking havoc on residents of New Kingston have been abandoned by the Jamaica Forum for Lesbians, All-sexuals & Gays (J-FLAG) - the group that was formed to represent the homosexual community in Jamaica.

The revelation was made by a J-FLAG representative at a recent meeting in the New Kingston area.

The meeting was called by city officials concerned about the action of homosexuals behaving badly and selling sexual services on the streets of New Kingston.

During the meeting, which was closed to the media, Dane Lewis, a J-FLAG representative, dragged the unruly young gay men over the coals for not behaving themselves.

He explained that after three attempts at conducting a drop-in centre for the homeless gays, J-FLAG threw in the towel because it became unmanageable.

"We are on our knees," said one of the street gays as be begged J-FLAG to reconsider.

But Lewis was adamant.

"All you guys have done is traumatise the staff. We have to get security, not just for persons outside but for you guys."

According to Lewis, he has been forced to constantly reassure the staff that everything will be okay when the homeless gays come on to the property.

"We have decided that carrying out an intervention like that is not possible," added Lewis, who accused some of the men of coming to the J-FLAG compound and "violating the space".

One of the men, who seemed to be a leader in the group, argued that J-FLAG and Jamaica Aids Support (JAS) were not treating them the way they should.

"J-FLAG and JAS need to put out a more happy hand and love us like we are one happy family," he argued.

Among the city officials at the meeting was Kari Douglas, councillor for the Trafalgar division, who urged the young men to take responsibility for themselves.

She argued that while the State could offer some assistance to homeless persons, able-bodied individuals must take responsibility and ease the burden on the country's already strained social safety net.

The meeting was also attended by Julian Robinson, the member of parliament for the South East St Andrew constituency that includes New Kingston and its environs; Angela Brown-Burke, mayor of Kingston, and Commander Christopher Murdock, head of the New Kingston Police.

A representative of the JAS and a group of approximately 20 homeless gay men, many of whom appeared to be in their teens and early 20s, were also in the meeting.

It was pointed out that the young men were congregating and committing lewd acts on open lots across New Kingston.

For the most part, the gay men pressed home the need for skills training, food, clothing and shelter.

"The schooling is not going to be enough. We need meals and a drop-in centre. Some of them don't have clothes. Where are they gonna sleep and get food," asked a member of the homosexual group.

However, Brown-Burke scoffed at their demands, as she argued that they were lacking a sense of responsibility.

"Be careful because we don't want to think that there is a sense of obligation," said Brown-Burke who was supported by Robinson.

The MP charged that the raucous behaviour of the homosexuals, which includes fighting and flamboyance, in the neighbourhood had to be addressed.

"We have to tackle frontally the behavioural issue. Many people in Jamaica face similar challenges and don't behave in the same disruptive manner," said Robinson.

He added: "It is a police problem, it is a residential problem and it is a business problem."

Murdock told the gathering that the group's behaviour in the open lot across from the Canadian High Commission was terrible.

He also mentioned that a male New Kingston resident was assaulted while walking to an automated banking machine.

"Each of these young men needs to take a hard look at themselves and see if they can behave in a civil manner," the policeman said.

By the end of the meeting, the group of gay men promised that the public will see a change in their behaviour.

"We trying to keep it at a level. No excitement and the boy dem not going to wear any more drag clothing. As I promised, you will see a little change," said a member of the group.