Good reception for 'Who Am I' 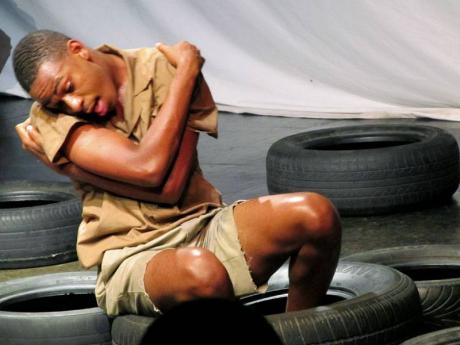 McDonald in scenes from the play 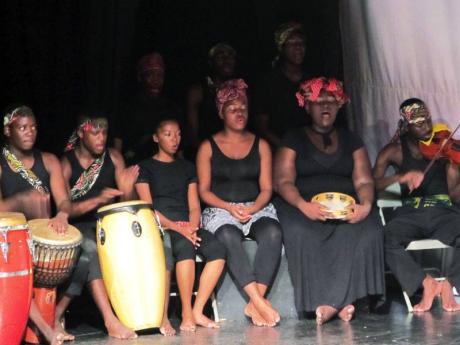 McDonald in scenes from the play, 'Who Am I', and the company of singers and drummers who provided vocal support and music during the play. 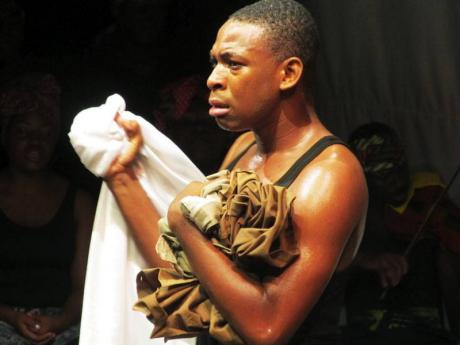 Edna Manley College final-year student Webster McDonald. AT TOP: McDonald in scenes from the play, 'Who Am I', and the company of singers and drummers who provided vocal support and music during the play. - Photos by Marcia Rowe 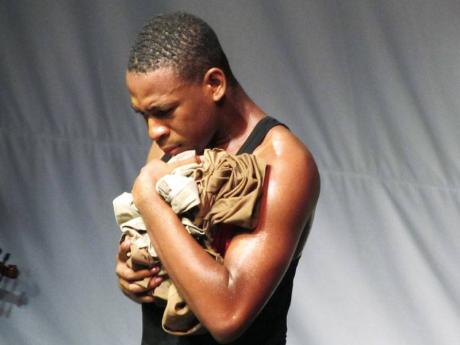 McDonald in scenes from the play, Who am I, and the company of singers and drummers who provided vocal support and music during the play.
1
2
3
4

Along with a post-show discussion session, the director and playwright incorporated ring games, ritualistic elements and a symbolic set to explore controversial unacceptable, yet topical, social behaviours. Some good acting and creative directing were also the hallmark of the play, titled Who Am I.

Approximately 45 minutes in length, the play began with a spiritual being draped in white cloth, led by a company of singers and drummers through the audience. Shortly after a symbolic birth, the main character, Sean, played by McDonald (likewise all the other roles), commenced his story of circumstances laced with the predictable tragic experiences and thoughts.

Born to a hearing-impaired single mother - and being raised by his grandmother - should not have been Sean's problem. Yet, he is forced to live in a defined space due to his lack of masculine qualities. He is continually teased by peers and adults for his display of effeminate characteristics.

In one instance, he was severely beaten, mentally and physically, by his male teacher for not being able to correctly match the gender organs to the appropriate sex. But in Mister Hus, an older man, he finds the friendship he sought from his peers. Then one day, Hus insisted that they play another game, ending his childhood world.

The riveting production ends as it commenced, but not before the humiliated and confused Sean destroys his narrowly defined path symbolised by tubes of tyres placed strategically on the School of Drama's theatre stage. The action is performed while the company asked the question in the song, Who Will Tell Your Story?

Other questions, too, were asked of the audience in the post-show discussion segment, Talk Back. They were: "Who am I?"; "How am I?" and "What is my purpose?" and presented then by the moderator. The answers were not many. But a member of the audience seemed to put the blame at the feet of fathers when he asked, "Why do our sons need to seek a father figure?"

On the other hand, playwright and actor McDonald said he sees himself as a visionary, a book with various channels.

He also illustrated that he is a creditable actor. Playing several roles can be challenging, but McDonald was able to capture the different emotional spaces of Sean quite well.

As playwright and actor, he presented a character whose growth was more emotional than physical - the happy, playful, confused and tormented Sean, who, from his experience with Mister Hus, decided to create his own path. His level of concentration was also remarkable; however, there were times when Sean seemed more of a physically retarded boy than an effeminate one.

Director D'bi.young Anitafrika made some intriguing decisions. One was to incorporate the musicians and singers into the drama. And although they were placed up stage right and in full view of the audience, there was no split focus. The use of tyres to illustrate the barriers placed around Sean was quite effective, along with the song selections and ring games.

In spite of its edginess, Who am I is a good attempt at what is described as a "monodrama using the biomyth methodology".