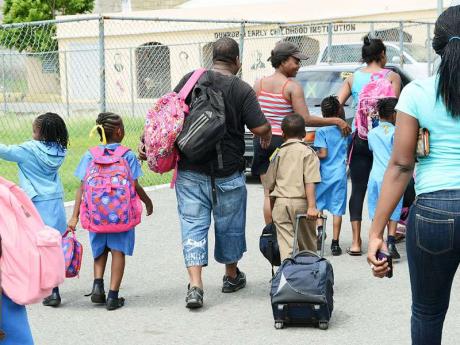 Parents pick up their children after two men attacked a teacher in her classroom at Dunrobin Primary School last Monday. Jamaican society must bear the blame for its descent into criminality, says Orville Taylor. - Rudolph Brown/Photographer

When doctors examine symptoms and diagnose medical problems, the patient does not typically attack them. And if the mechanic says that the reason the car is overheating and that there is knocking in the engine is because the oil needs changing, you don't second-guess him often.

Nor did we challenge the public-health specialists when they pinpointed the sources of the rat attack at Rabalac. Indeed, we tend to listen to experts or specialists in their fields, even when it is meteorology, one of the most imprecise sciences.

Yet, a sociologist attempted to explain how different elements of Jamaican society were contributing to its social problems and the guilty, not only defended their turf but tried vehemently to deny the truth. Well, Ivy's son speaks again and directly.

There are two young men who were positively fingered in an identification parade for one of most horrifying rapes in modern Jamaican history. In fact, in all the tales that I have read about the sexual violence perpetrated by the overseers on the plantations, I do not recall any child victims so young.

As evil as the deeds for which they have been arrested are, they are presumed innocent until a court operated by lawyers says they are guilty. Alternatively, they will go to Circuit Court, where it is less law than court craft, and whoever is better at playing the mental game with the 'facts' persuades the jury. If the artful advocate wins over the judge or jury, he is free, and the matter ends there. Only the men, their lawyers, their friends and family and, of course, God Almighty know the truth.

Nevertheless, whether these men are guilty or not, rapists are not the problem; they are the symptoms - like the overheating engine, rodents, and pain in the lowest part of the back. Multiple agents are responsible: the State, Church, parents, the private sector, schools and, of course, lawyers, whose consciences must have been nibbled away, along with their logic, by Rattus rattus or Rattus norvegicus.

However, let us start with the State. For 68 years we entrusted our development to two political parties. Instead of implementing universal education and literacy, which means high schooling for all, as Barbados did, they created the most grotesque educational parody. This seemed deliberately designed to keep the masses ignorant and subjugated. Despite the Common Entrance Examination (CEE) in 1958, which opened up high-school places for around 2,000 children, the Comrades did little else to increase post-primary education.

And, in the 1960s the Labourites constructed 50 'built-by-labour' junior secondary schools, which were nothing more than repositories for those students that the system failed. Unparalleled in the Anglophone Caribbean, these, along with the all-age institutions, reinforced class divisions and helped to keep the poor impoverished.

Before the 70:30 quota was introduced, somebody must have kicked Edwin Allen out of math class, because he allocated 30 per cent of CEE places to prep schools although they comprised around 10 per cent of candidates. Inasmuch as the Michael Manley administration repainted the junior secondary schools and added grades 10 and 11, they were initially given an inferior curriculum until recently. Despite the Grade Six Achievement Test (GSAT) replacing the CEE, a few years ago, students are still streamed as in the 1960s.

At three University of the West Indies conferences between 2000 and 2003, and Students' Loan Bureau (SLB) workshops in the mid-2000s, I warned that the gaps in the labour law, unfair work practices, and failure to get youth in post-secondary education would lead to higher rates of crime, including rape. The then head of the SLB lamented the empty promises by governments to increase the subvention, even as it was accepted that the bureau should consider funding other non-university educational opportunities for youth. We are reaping the susumber to cook our rice and peas.

Apart from the poor educational system, the political parties found it expedient to foment divisiveness and hate, create garrisons and in some of them poured in scores of guns to 'defen it'. Add to that the generations of parents from the '70s to '80s who were accustomed to political patronage and we can clearly see why the youth born in the '80s would wanna be like Dad.

Hypocritically and asininely, politicians try to shift blame to 'mothers who father' and 'broken homes'. However, the sociological data point to the majority of households being male-headed, and most children having relationships with their fathers, and most lower- and working-class men trying to give material and other support to their children. Indeed, without having read My Mother Who Fathered Me by Edith Clarke, published just a year before CEE was introduced, so-called leaders from all sectors ignore the major finding that around 70 per cent of households had fathers and she wanted to understand the other 30.

True, parenting has a lot to do with it as well, but if the political, religious and other opinion-shapers don't understand the nature of who they lead, they are bound to condemn them. The late Prof Barry Chevannes, in his under-read classic Learning to be a Man, observed that we raise our boys to be irresponsible, and both mothers and fathers do this. We sociologists and social anthropologists know that rapists, murderers and other deviants are essentially raised, not born. When we beat our children mercilessly, or when we fail to tell them it is wrong to abuse women or steal, we are manufacturing criminals.

Besides parenting, there is the responsibility of schools as well. Which is why I am uncompromising on the Cornwall College issue, because what is crime outside school is crime within school.

Add to the list of agents of secondary socialisation and we find a Church that is failing, as most leaders don't reach young men because they prefer to preach and have marches and prayer 'breakfarces' instead of ministering by their day-to-day living, as Jesus did. Too many men of the cloth want to have religious hard talks and masterly debate among themselves, gaining pleasure from their own oral utterances.

Then, the successful black men and women court the limelight as they speak to other service club members who satisfy their consciences by thinking that charity is making monthly contributions to faceless underprivileged youth, who they walk and drive past and never greet. Worse, their security guard parents are never acknowledged when they guard their offices.

And
yes, the lawyers, who, going against the canons of their profession,
wilfully lie to the court that their client is innocent. True, some
lawyers in the west have decided not to represent the 'suspects' in the
aforementioned case. Unfortunately, it seems that they have abandoned
the presumption of innocence tenet. Furthermore, do they or their
colleagues who represent accused in other criminal cases also take this
moral high ground as a matter of course?

On this
subject, I am not saying that all lawyers try to free guilty clients,
but some do. And, I hope my young learned friend Peter Champagnie would
take the time and care to read and understand this point, so that he
doesn't blunder the response as he did on August 30,
2012.

Lawyers need to remember that there is a reason
that the UWI introduced 'Law in Society' in the LLB degrees. We did so
in order that they would understand that there are forces that have an
impact on jurisprudence but, importantly, the practice of law has a role
to play in social order.

This is a crisis, and many
are to blame. I'm doing my part; what are you doing?

Dr Orville Taylor is senior lecturer in sociology at the UWI and a radio
talk-show host. Email feedback to columns@gleanerjm.com and
tayloronblackline@hotmail.com.