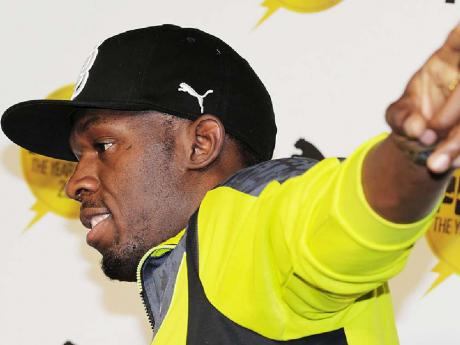 Usain Bolt poses for photographers during his sponsor's event in Tokyo on Wednesday. - AP

The world's fastest man, Usain Bolt, is set to display his football skills at the 26th annual staging of the Bell/Ziadie Memorial Football Festival on Monday.

Bolt, a regular participant in the event, will lead the Digicel-sponsored Usain Bolt Invitational team, which will also feature his Racers teammate Jermaine Gonzales, while West Indies star batsman Chris Gayle will also be playing, but for the Masters & Celebrities team.

Bolt's team will be just one of four lined up to entertain patrons at the yearly showpiece, held in honour of local football legends Winthorpe 'Jackie' Bell and Dennis Ziadie who perished in a motor vehicle accident while attending a World Cup quarter-final match between Brazil and France at the 1986 Finals in Mexico City.

The three other teams that will take part in the competition are Masters & Celebrities, Promoters and Sponsors and St George's College Invitational.

Telecommunications giant Digicel will play the role of title sponsor for this year's event, which will see proceeds go towards the Malvern Basic School, a project started earlier this year by the event's organiser, Clive 'Busy' Campbell.

Campbell initiated that project with funds from another charity event, the Bob Marley One Love Classic.

Since the event's initial staging, it is estimated that more than 100 basic schools and children's homes have benefited through the charity.