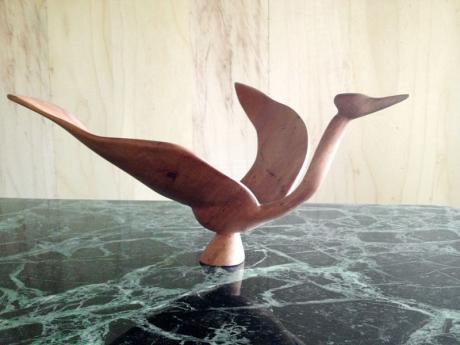 One of Derval Johnson's peices, Bird in flight.-Contributed Photo

Derval Junior Johnson, a 27-year-old artist from Matthew's Lane in Kingston described his impetuous feeling to Arts & Education, one that he refers to as a "strong vibe" that provides the inspiration for his elegantly carved wooden sculptures.

Johnson embarked on the journey towards becoming an artist five years ago, starting his trade as a carpenter. "I started carving because the time did get rough, I had to learn a trade for some money, so I became a carpenter, my father taught me" Johnson said.

Junior worked full time in his father's carpentry workshop on Matthew's Lane doing production work that included carvings of headboards and cabinets. However, Johnson was discovered by ROKTOWA in April of last year, ROKTOWA is a non-profit organisation with the sole purpose of developing the artistic talents of the people living in the surrounding communities. These talents include sculpting, painting and carpentry, among many others.

"We had some visiting artists from the UK (United Kingdom) who ran drawing classes, they drew in tradesmen from Matthew's Lane and Junior (Johnson) was one of those tradesmen" Melinda Brown, founder of ROKTOWA told Arts & Education.

Johnson joined the ROKTOWA crew shortly after the drawing workshops. "I told her I could carve good, I drew a bird and she said she liked it, so I started carving a few more pieces and she loved them and wanted me to do more". he added.

"Junior's work exhibits very elegant lines that twist in such a way as to imbue each of his pieces with individual characteristics. He is currently working on a suite of "Birds" each one exhibiting striking character.

Recently, Junior was introduced to Laura Facey, one of ROKTOWA's directors, who instantly responded to his work. As a mark of respect, one artist to another, she now supplies him with roots of cedar trees for his sculptures," Brown commented. She also referred to Johnson as a young artist whose work is evolving rapidly, one with a great career ahead of him.

"Birds inspire me, I see them flying around me everyday and I have a strong connection with them as I can feel the energy from them, they entice me. I want to make it on the international scene, one day, but for now, I am working on 50 pieces to have a show." Johnson added.