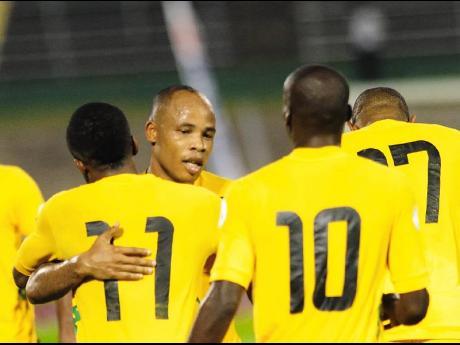 Jermaine Hue (right) and Dane Richards, two of the stars of last night's match, embrace at the end. - Photos by Ricardo Makyn/Staff photographer 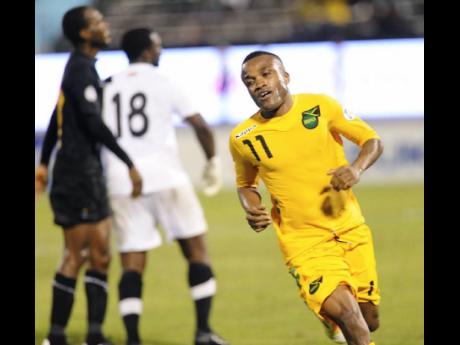 United States-based forward Dane Richards (right) scored a late double against Antigua and Barbuda at the National Stadium last night to cement Jamaica's place in the final round of CONCACAF World Cup qualifying.
1
2

JAMAICA'S Reggae Boyz did what they had to, to beat Antigua and Barbuda by at least a two-goal margin.

Then with big help from the United States, who hammered Guatemala 3-1, they claimed their place in the six-nation CONCACAF Finals for 2014 World Cup by finishing second in Group A semi-final competition with 10 points and a superior goal difference to Guatemala.

Dane Richards (78th, 88th) netted a second-half double as the Boyz delivered big time at 'The Office' yesterday evening with a 4-1 victory over Guatemala. Demar Phillips (17th) and Nyron Nosworthy (18th) were the other scorers.

Quintin Griffith (61st) was on target for Antigua and Barbuda.

Jamaica entered the game with seven points and a zero goal difference, while Guatemala and the United States, who kicked off simultaneously in Kansas City, had 10 points and similar plus-three goal differential.

For Jamaica to advance, it meant one had to lose and the corresponding scores add up to give Jamaica a superior goal difference over the loser.

The United States' win pushed them to 13 points and top of the group, while Jamaica and Guatemala ended on 10 points.

Jamaica dominated their do-or-die match last night from start to finish and would have won by a much wider margin with better finishing.

Jamaica forced their opponents right back against their goal as Jermaine Hue, who gave a domineering performance all night, pulled the strings.

The early pressure paid off with the opening goal at the 17th minute.

The Antigua and Barbuda defence failed to properly deal with a clearance, sending the ball out to left-sided Demar Phillips about 30 yards from goal. With acres of space and time, Phillips set up himself, then drilled a low shot past goalkeeper Molvin James.

Before the celebrations had subsided, Jamaica doubled their lead the next minute when central defender Nyron Nosworthy met a Luton Shelton cross at the near post and headed home.

With news of the US-Guatemala scoreline coming in, the crowd erupted as the 3-1 result up North meant Jamaica were in a solid position to advance.

Jamaica ended the first half by creating a flurry of scoring chances. Right at the interval, James advanced from his line to charge down a Phillips shot from near six yards; a defender cleared Hue's shot off the goal line from the other side; and Ryan Johnson missed a cross from Shelton.

On the restart, there was no change and after eight minutes, Tramaine Stewart made a clear chance with a dribble to the edge of the area. However, his chip went wide of goal.

However, stagnation around the goal area played into counter-attacking minded Antigua's hands and central defender Nosworthy dabbled with possession and gave up a free kick in the dangerous area outside the box.

Griffith curled a beauty over the wall to score and reduce the deficit.

The anxiety was reflected in silence over the near 10,000 throng inside the stadium and seemed to have affected the team as its level dropped. They were now in a disadvantageous position as far as qualifying was concerned.

Whitmore went to his bench, replacing the ineffective Shelton with Joel Senior, and pushing Stewart further up the park.

The inspiration the team were really seeking, would come though, when a rather sedate Rodolph Austin produced a moment of brilliance by driving past three opponents into the box, before cutting back the ball perfectly for Richards to score.

Before the night ended, Richards would add more insurance to Jamaica's position. The maestro Hue floated a perfect pass from his half, that Richards met on the outside of a defender and volleyed past the advancing goalkeeper to make the final score 4-1.

Also advancing to the CONCACAF Finals after yesterday's final set of matches were Group B's Mexico and Costa Rica and Honduras and Panama from Group C.