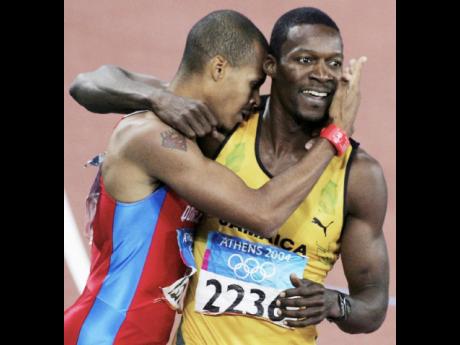 "A few days ago after waking up, I told myself 'this is it'." Those are words of veteran athlete Danny McFarlane, who has retired.

Now, he has turned his attention to coaching.

"I have a special project in this area and I have now decided that I want to give back," he continued.

McFarlane says he was motivated to get into the coaching because of what he did with American long jumper Frankie Wright at his Rock Training Club in 2011.

"Frankie improved big time when I started to coach him as, last year in the 400 metres, he opened up as the fastest American Indoors as he clocked a personal best of 46.22 seconds," he said.

Wright went on to represent the United States at the World Indoors in Istanbul, where he ran the opening leg of the 4x400m men's team which won the gold medal.

"My project now is to get Verone to the top, and I am very confident that she can do a lot of damage as she is a very special athlete," he said.

Chambers, who is majoring in journalism at Oklahoma Baptist University, will be graduating this December. She represented Jamaica at the NACAC Under-23 and Senior CAC Championships, and is a 28-time NAIA All-American and 17-time NAIA National champion. She has competed in the 100 and 400m hurdles, 100, 200 and 400 metres at college level, with a personal best 52.28 seconds in the 400m.

"She is a raw athlete in the event and she has been doing some things now she has never done in the past. She is a hard worker and she listens well, and I think she is the future here for Jamaica," said McFarlane.

He has a lot of respect for Melaine Walker, Kaliese Spencer and Ristananna Tracey, but believes his charge will be ready for the National Championships next year.

"Verone will get more attention from me when she graduates in December, and this will make a big difference," said McFarlane, noting that he only coaches her three times a week.

"I am very impressed with what coach McFarlane is doing with me, and I am confident that I am going to step up big time, because I believe in him and he has taught me new things which I am certain will work; because he has done the event for years and he used to coach himself and I see no reason why I will not succeed," said Chambers, noting she lacked confidence in the past.

Apart from coaching, McFarlane says his main job is at the Integris Hospital in Spencer, Oklahoma, where he works as a mental technician.

"I am working with young kids who get in trouble and my job is to get them back straight, but this will not affect my coaching as I want to pay back Jamaica and I think Chambers is very special and will be a big launching pad for me," he said.