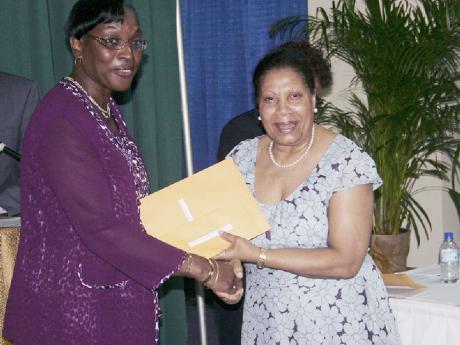 Dame Louise Lake Tack (right), governor general of Antigua and Barbuda, hands an award to a proud Ivy Gordon for Best Radio Story at the 2012 CARDI/CTA Media Awards ceremony at the Sir Vivian Richards Stadium in Antigua. Gordon accepted the award on behalf of the Jeffrey Town Farmers and Community Radio Operators, whose story, 'Climate Change', got the judges' nod. 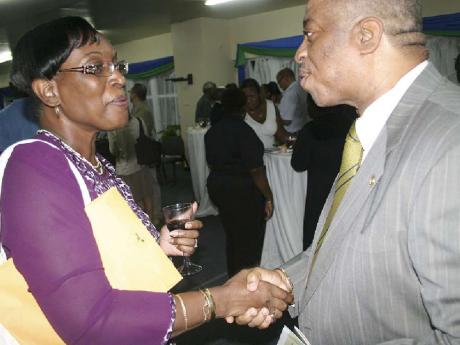 Inter-American Institute for Co-operation on Agriculture representative Gregg Rawlins had high praises for Ivy Gordon after she accepted the CARDI/CTA award for Best Radio Story at the Sir Vivian Richards Stadium in Antigua recently.
1
2

"The occasion was bigger than the award," Ivy Gordon told The Gleaner shortly after accepting the award for Best Radio Story at the CARDI/CTA Caribbean Media Awards ceremony from Dame Louise Lake Tack, governor general of Antigua and Barbuda, at the Sir Vivian Richards Stadium last week Wednesday.

The event took place during the official opening ceremony for the 11th Caribbean Week of Agriculture hosted by Antigua and Barbuda from October 14-20, under the theme 'Youth and Women in Caribbean Agriculture - All Endeavouring, All Achieving'.

"I was really overwhelmed by the stature of the event, really surprised," Gordon remarked. "We knew we had won, but I just wasn't expecting it to be such an auspicious occasion for ordinary Jeffrey Town on the regional stage," she added.

Gordon had travelled from St Mary in Jamaica to accept the award on behalf of the Jeffrey Town Farmers and Community Radio Operators, whose submission 'Climate Change' - the only entry in the radio category - found favour with the judges.

For Gordon, who was accompanied by husband Wentworth, the occasion was dampened by the absence of the many community members who had worked hard in putting the programme together but could not be present to revel in the success of their efforts.

Said Gordon: "I'm just so disappointed that so many of them could not see that the prime minister of Antigua and Barbuda was there, ministers of agriculture from across the region, heads of so many international organizations - all those people we only hear about … ."

However, she noted that their work was being recognised by the international agricultural community, pointing out that the radio programme was broadcast by English-speaking community radio operators across the world for International World Food Day, the day before.

Contracted by the world association of community radios, which had been commissioned by the United Nations' Food and Agricultural Organization to produce a 10-15 minute programme under the theme 'Agricultural Co-operatives: The Key to Feeding the World', the group delivered the programme within the deadline.

Gordon explained the group's approach to producing the radio programme addressing global food security, agricultural co-operatives and hunger alleviation: "We spoke about the breadfruit and the value-added product and vision of the Trees That Feed Foundation, which views the breadfruit as key to feeding the developing world. In addition, we spoke to Hyacinth Douglas of the Global Environment Facility about its reasons for supporting community groups, touching on the issues of the Millennium Development Goals and poverty alleviation."