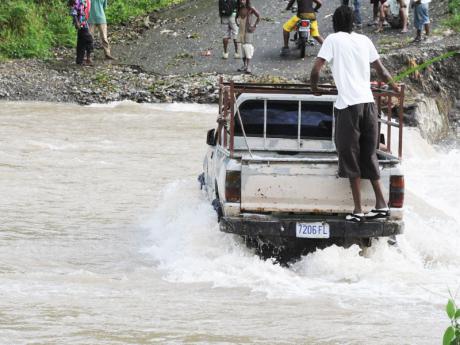 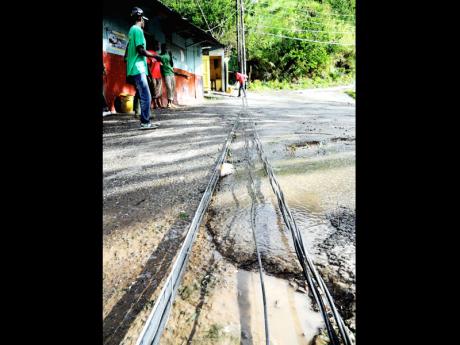 Power lines from a fallen JPS pole run across the road in Guava Ridge, St Andrew.-PHOTOS BY Norman Grindley/Chief Photographer 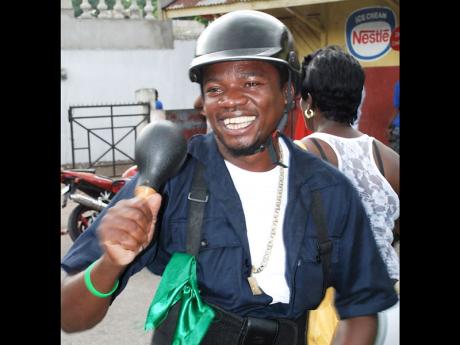 Once again, residents of Hagley Gap, Wesphlia, Davis Hall and surrounding communities in rural St Andrew have found themselves cut off from the rest of the country because the Roberts Field ford of the Yallahs River is flooded.

For years, whenever there is heavy rainfall the ford - which was brought to national attention in 2011 by Clifton 'Cliftwang' Brown - becomes impassable and not many can cross it.

"Since mi born mi hear di Government a say dem going to build a bridge and now mi a big man and no bridge no build," said one man as he looked at the raging river last Friday.

"Is only when rain fall dem remember we and if is even a foot bridge dem could build so that the people can cross it," added another man.

The residents said some persons like Cliftwang risk their lives taking persons across the raging water for a fee.

Motorists making the trip from Papine up the hills to the communities in deep rural St Andrew can make their way up to Mavis Bank with little difficulty, even though deep holes have emerged in the roadway in places.

At Guava Ridge, a fallen Jamaica Public Service Company pole with the power lines lying menacingly in the road provides a minor challenge, but teams from the National Works Agency have already cleared the major block-ades and removed the fallen trees.

"We did not get much wind as you can see the trees stand up, but we get nuff water and the road dig up in some places, but it is di people dem who blocked in we sorry for," said one resident.

For these residents, Hurricane Sandy has provided a painful reminder of the need for a permanent bridge over the Yallahs River.