BOJ takes new action in defence of the dollar 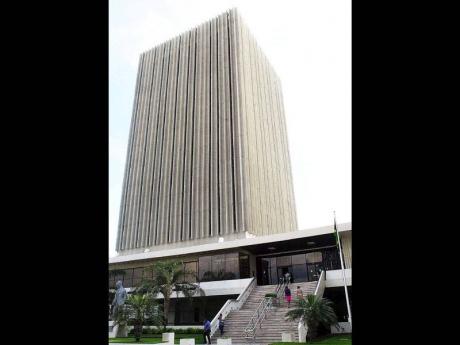 The Government of Jamaica is doling out bond returns by the billions, creating a cash stash for investors but a headache for the central bank, which this week sought to assert some control over the reinvestment of such funds.

The Bank of Jamaica (BOJ) also estimates that J$12 billion on average is flowing into the financial system weekly from its own maturities.

On Tuesday, the central bank announced three open-market instruments to sop up some of the liquidity, but BOJ Governor Brian Wynter avoided comment on just how much of the funds the new securities are intended to attract.

Their main goal is to ease pressure on the Jamaican dollar - which traded Wednesday at J$91.09 but sells as high as J$94.50 against the USD - to halt its stubborn slide. Last calendar yearend, the dollar was selling at J$86.60.

The BOJ's pre-Christmas intervention comes amidst a depleted stock of net international reserves, which has climbed down to US$1.26 billion in September and which one overseas watcher, J.P. Morgan, has predicted will fall to US$1.1 billion by yearend.

"So far reaction is favourable," Wynter said of the instruments, one which offered a one-day take-up period for banks and primary dealers on October 31.

Wynter reasoned that the BOJ intervenes to maintain order in the forex market. The central bank normally intervenes by adjusting interest rates or selling some of its reserves.

The introduction of the three instruments is viewed as a significant reaction to the dollar slide, according to economist Michael Witter.

"I think it is significant because it suggests that the bank is acting to forestall pressure on the exchange rate," said Witter, who is senior research fellow at the Sir Arthur Lewis Institute of Social and Economic Studies, at the University of West Indies.

The three instruments will seek to capture some of the J$12 billion that matures weekly, according to BOJ analysts present at the press briefing.

Wynter, however, declined to reveal the targeted take-up.

The instruments offer relatively awkward tenure periods of 49 days, 182 days and 364 days and are priced at a premium of 0.6 per cent to 1.0 per cent above Treasury bill rates.

The central bank said it would continue to offer its regular 30-day certificate of deposits at current rates of 6.25 per cent per annum.

Wynter explained that the 49 day instrument, in particular, at 0.6 percentage points above the existing Treasury bill rate would mop up liquidity but end in time for banks and institutions to meet Christmas demand for cash.

"That instrument was tailored for technical money market reasons." he said. "There is a seasonal phenomenon where liquidity starts to tighten from around that time (Christmas) because the banks take delivery of more cash. That cash then goes out into circulation. So, at that time, we get a tightening of the market because of that effect."

Wynter said the 49-day instrument deals with liquidity "but does not oblige an institution to make a decision today to put itself short just when it needs cash in that period. So its tailored to accommodate that cash build-up."