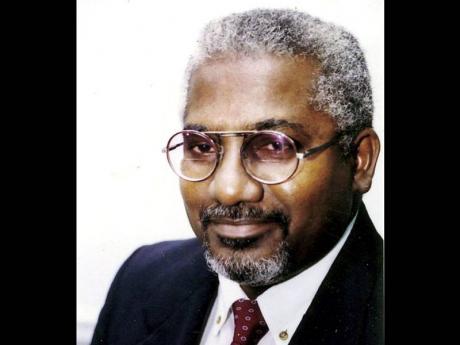 Independent Jamaica, viewed as having experienced a relatively prosperous early childhood, difficulties of puberty and teenage life, some elements of the body politic nevertheless continued in a weaker than acceptable state.

Now at 50 years old, she faces big costs for debt transfusions thought necessary for life sustenance over the years. These costs - debt servicing - are close to a fifth of GDP, a potentially crippling burden.

Think about it. This is a really big slice of the national output pie. More importantly, this pre-arranged, recurring and compulsory charge relates to past indebtedness the productivity of which, despite virtuous intent and purpose, is effectively unknown and perhaps, truth be told, virtually unknowable.

Luckily, there's no known projected life expectancy for our beautiful rock; it shall outlive us all.

Debtor's jail is a thing of the past and though of slim if any comfort, there are a couple others in similar condition on the ward of global recession.

Yet, it would be wrong to blame global recession for a majority of our woes. Our Government, like all others, must borrow - indeed, should it not, there would be significant gaps created in the range of assets available for deployment among savers and wealth holders in the economy.

Leaving that aside though, if borrowing costs escalate with time while growth in the economy continues on its feeble and anaemic path of the past decades, there comes a time when comprehensive overhaul of life as usual becomes necessary, or rather, mandatory.

Nudged by admonitions of the previous administration, the population seemingly accepted the diagnosis and prescription that we should and would go to the IMF.

A kind of consensus, though potentially volatile, emerged under former Prime Minister Golding as the administration decided to tackle the problem with the blessing of the IMF as it arranged and implemented the Jamaica Debt Exchange (JDX) programme.

That debt exchange, technically an event of default, was the result of negotiation between Government and private sector. It was, in essence, recognition that there was but one boat in which everyone had to take a pitcher to manage the bailout after a persistent leak.

Many in the financial-services sector worried whether the credit-rating agencies would view this development negatively - both for the country and big private-sector players in the financial market.

Such fears proved unfounded, Sagicor for instance, after the event, suffered no downgrade. Indeed, its position strengthened. But Government, under pressure from labour and in face of previous commitments, authorised wage settlements that would torpedo projections previously presumed to have the blessing of the IMF.

The upshot of it all, in summary, meant JDX-induced breathing room was allowed to expire without the required follow-up, and no IMF agreement was inked.

While one may find no definitive statement of why this didn't happen, there seems to be agreement that three areas of fundamental importance to the economy's prospects remain in limbo. There's no consensus, hence no firm decisions taken.

An IMF agreement shall not emerge in these circumstances.

And without an agreement, funding shortages and expensive debt servicing shall continue.

These areas of concern are pension reform, public-sector transformation and its associated wage bill and tax reform.

These areas of fiscal and financial management shall have enormous impact in the rather near future. They all embody sensitive issues of equity and trust, problems of economic efficiency and certainly for tax reform, simplicity, effective administrative arrange-ments and potential growth promoting implications of policy.

A view that we may either follow Belize in default or devalue the currency once again seems too focused on the short run and perhaps a bit blurred in focus.

The overwhelming and abundant evidence for Jamaica is that devaluations do not solve the macroeconomic and balance of payments problems the country's economic structure and operation generate.

Decades of flexible exchange rates, moving from J$5 to US$1 and, after 30 years currently approaching J$100 to US$1, have not significantly altered the structure and efficiency of Jamaican production and composition of aggregate demand.

Policy needs to accomplish two things: create credible short-run macroeconomic arrangements that may earn for us an agreement with the IMF, and simultaneously agree and put in place measures that shall tackle the three most fundamental problems the country faces for the long term.

These are the negative impacts of crime, the dismal outlook for productivity, including our inadequate focus on the critical importance of appropriate implementation of technological change in production and improvement in the skills of our labour force, and grandma's intricate patchwork we call our tax regime.

Jamaica's private investment as a percentage of GDP over the decades measures up well with our neighbours, even those that outperform us. It is return on that investment which sinks us.

When we consider our taxation and incentive regime of archaic reliance on discretionary decisions of specific ministries, we come face to face with economic realities that deliver private benefits but, perhaps, hugely negative public costs.

This may, in part, be responsible for the dismal performance in our total factor productivity (TFP) over the decades.

TFP growth tells us something about how an economy uses its resources - land, labour, capital, techniques or technological inputs, and entrepreneurship to satisfy its needs.

As a country experiences growth in this metric, its capacity to sustain a growing population at better standards of living improves.

Technology consists not only of computers and iPhones. Consider one ubiquitous fact: we rely on supermarkets with razor-thin profit margins - maybe not so razor-thin in Jamaica - to feed and provision masses of urban dwellers. This is clear evidence of transplant and mastery of a technology developed elsewhere.

Yes we can; we have done this. The question is why do we not generalise the phenomenon across other industries?

Crime and inequality are part of the reason we haven't. Sovereign Centre car park and Matilda's Corner at Liguanea provide live, breathing evidence of this on a daily basis.

Action is required now, not later. If there is, as some elements of the press suggest, debate among leaders of the governing party, the debate adjudicator needs to take off her gloves and drop the hammer - she still enjoys our support and confidence.

Come to a closing and grab the bull by the horns. It's either that or many may be gored!