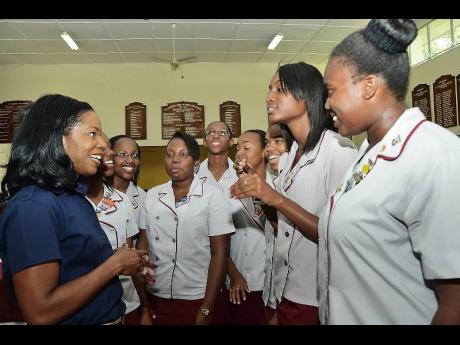 Sandra Antonio (left), human resource manager, Island Grill, talks with students of St Andrew High School for Girls who were on the panel of the Gleaner-Island Grill Youth Editors' Forum at the school yesterday. - PHOTOS BY Ian Allen/Photographer

SOME SIXTH-form students at the St Andrew High School for Girls yesterday expressed concern at what appears to be the huge social and educational gap between men and women, saying it could impact their ability to find qualified lifelong partners.

Tamoi Reid said at a Gleaner-Island Grill Youth Editors' Forum at her school yesterday that more Jamaican women are forced to lower their standards when forging lifelong relationships. She is now calling on women to take action.

"We condone it and allow them to talk to us anyway, but it is time that we start acting the way we ought to act," Reid said.

"Do what is right, follow what we have known from long ago and continue," she said.

Head girl Samantha Williams said she is "very concerned and worried" about the gap. She has called on females not to succumb to a deviant subculture that many young men have adopted.

"I am not going to just talk to any and anybody. My grandmother has laid down the law," Williams said, while adding that she would not allow herself to fall prey to young men who do not share her values.

NOT THROWING OUT VALUES

"I don't know if other ladies are like me, but when I see young men with their pants below their waist and they approach me, I correct them. I am not willing to engage in a relationship with a guy who does not share my principles or values," Williams said.

Jamaica's latest Economic and Social Survey shows that the total enrolment for males in tertiary institutions stands at 23.5 per cent while women accounts for 47.6 per cent.

The survey also shows that of the 1,937 persons who entered correctional institutions in Jamaica last year, males accounted for 1,748 or 90 per cent of that number.