African board game arrives in Jamaica 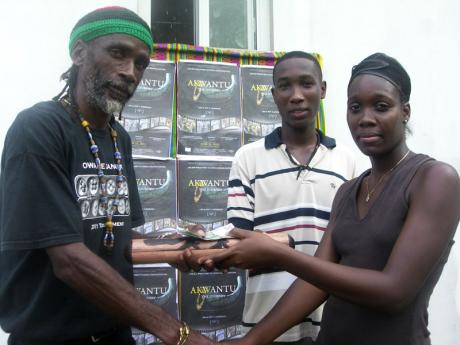 Tatiana Blake receives her cash prize and an Oware board game from Clifton 'Packiman' Rowe after winning the first-ever Ridge Pen, St Elizabeth Oware Tournament, on Saturday, November 3, while Rushane Dwyer, the tournament's coordinator, looks on. 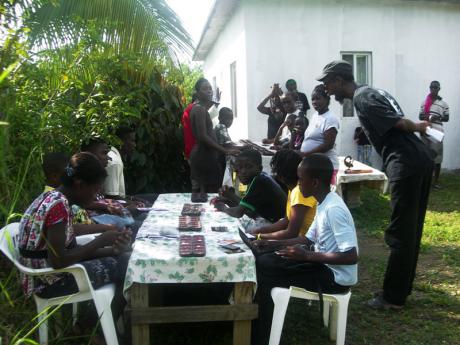 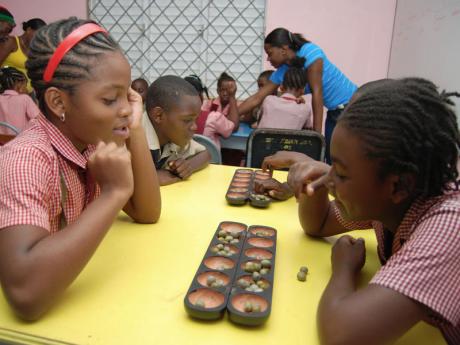 Some grade four students at Geneva Primary School in St Elizabeth participating in an Oware game on Monday, October 29. -Photos by Paul Williams 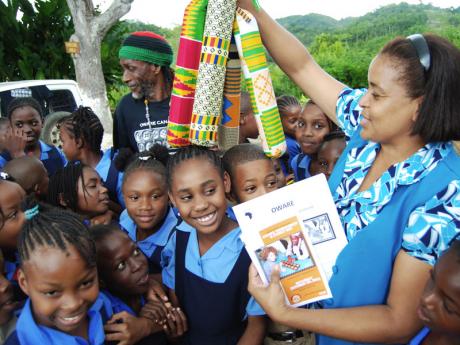 Ms Dixon, teacher at Chantilly Primary School in Manchester, is surrounded by students as she shows off the five Oware games donated to the school by Adisa S. Oji, promoter of the ancient African board game in Jamaica. 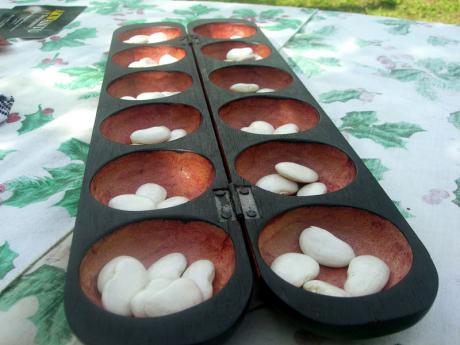 RIDGE PEN, St Elizabeth:JAMAICANS ARE no strangers to board games. Dominoes, draughts, Snakes and Ladders, Ludo, and, to some extent, chess, Backgammon, and Scrabble are popular pastimes on this 'Rock'. Soon to be added to the list is perhaps, Oware, an ancient board game said to have originated in Africa, and which has many versions and is known by different names in Africa and other parts of the world. Oware is Ghanaian.

Regarded by Oware expert James Masters to be the oldest board game on Earth, Oware falls within the "pit and pebbles" category of board games. The modern board is actually an oblong-shaped box which opens into two sides, one for each player. Each side consists of six holes into which four seeds/pebbles are placed to start the game.

Following a series of easy-to-understand rules, the game ends when one player has collected 25 or more of the 48 seeds/pebbles on the board.

As with most board games, winning Oware requires concentration and the application of strategies. "It's intriguing, it is exciting. It connects you to your African roots in a way that is very low intensity. It is non-threatening and it's fun. You learn about African history and culture. You don't have to sit down and listen to a lecturer, but the more you learn the game, the more you become interested in learning about yourself because the game originated in Africa," Jamaica-born Ghanaian Adisa S. Oji, an international documentary photo-historian, told Rural Express recently.

And though it's a pastime, Oji, chief of Mother Africa's Children Photographic Reproductions Intern-ational (MACPRI), said: "In our effort to encourage greater appreciation for African cultures, to promote African educational art, and to support Africa's development, we are introducing Oware, an ancient mathematical board game based on farming principles. Oware is a fabulous interactive tool for teaching mathematical skills in and out of the classroom.

"As a student develops their skills for playing the game, they will use all seven mathematical processes - problem solving, reasoning and proving, reflecting, selecting tools and computational strategies, connecting, representing, and communicating - to produce and share the best winning strategies - Oware can also be used by teachers as a manipulative to aid students who have unique learning challenges."

Oji was in the island to introduce the game to Jamaican students through an initiative called 'Oware: Africa in the Jamaica Classroom'. From October 22-29, Oji visited five schools in rural Jamaica, namely, Scotts Pass Primary in Clarendon, Chantilly and Prospect Primary in Manchester, and St Elizabeth's Accompong and Geneva Primary schools. The visits comprised training sessions, mini-tournaments, and donations of Oware boards.

"All the students felt the game was exciting and educational. It was evident from the fact that the teachers were actively engaged ... . Many questions were asked by the students about the game and its origin, which provided the opportunity ... to share various liberating aspects of African culture in a unique way. All the teachers and administrators acknowledged the merit in the game as a tool that would assist students ... in the development of their math skills," Oji told Rural Express.

To climax his visit, Oji held the first-ever Mwalimu ATI Oware Day Tournament in his birth district of Ridge Pen, St Elizabeth, on Saturday, November 3. Twenty-two people participated, and after several competitive and sometimes tense rounds between children and adults, it was Tatiana Blake who persevered over her fellow residents beating 12-year-old Ryan 'Man Man' Dwyer in the final. "I feel great because I was the last person to learn the game. It wasn't difficult to learn," Blake said after collecting her cash prize and complimentary Oware game, "I will be using it in the future because I love this game."

Garry Williams recovered from a defeat by Blake in the semi-finals to take third place from an emotional Rushana 'Gal Gal' Dwyer. The first to third-place finishers got cash awards and an Oware board each, while the fourth-place finisher got an Oware board. In summing up the day's activity, Oji said it was "very successful, very engaging, very promising". Rushane 'Boy Boy' Dwyer, the Ridge Pen coordinator of the tournament concurred. "Today's activity was the mark or beginning of great things to come. As you can see, it was an exciting game. It brought a lot of youths together," he said.