Is the EU abandoning Jamaica? 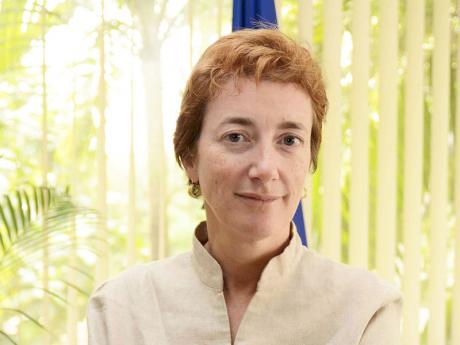 Excerpts of an address by Head of Delegation of the European Union to Jamaica Ambassador Paola Amadei, on October 14, 2012.

Jamaica and the European Union (EU) have been friends for a lifetime. The European Economic Community was only five years old when Jamaica's Independence came in 1962 and had barely reached the age of maturity when the European Commission established its delegation in Jamaica in April 1976 following the signature of the First of the Lomé Conventions.

We have done and achieved so much together since.

We have gone through four successive Lomé Conventions, the Cotonou Agreement and, more recently, we've signed the Economic Partnership Agreement.

The amount of support that the EU has provided to Jamaica in these years is difficult to calculate but it is in excess of J$120 billion.

What is more important, however, is not the money, but the fact that we've matured together. In our case, besides getting older, we've also grown bigger.

We numbered six nations when Jamaica became independent and are now almost 28. I find it remarkable and I want to stress that as we were facing the challenges of the process of EU enlargement, and despite the fact that most of the new members had little or no ties to this part of the World, our support to the country has never been challenged and has been in fact consistently scaled up.

At this point, I want to say a few words about the present status of the EU development cooperation in Jamaica and use this opportunity to clear up some common misperceptions.

The first of which concerns the nature of the funds we provide: all the funds the EU disburses in Jamaica are not loans, but grant resources and don't have to be paid back.

This clarification is necessary because people too often regard grants and concessionary loans as synonymous, but they clearly are not and at a time when the issue of the public debt/GDP (Gross Domestic Product) ratio is such an hot topic, this cannot be disregarded.

Second, over the last couple of years we've taken our relationship to a more mature level by shifting from projects to budget support.

In plain terms, this means that instead of procuring goods and services on behalf of the country, we transfer the money directly into your budget for it to be used according to your own budgetary rules.

This arrangement, when it works, is a win-win combination. It allows us to disburse funds more swiftly and more efficiently, and it allows the recipient country to use its own systems and build its own reliance.

What we ask in exchange is an ongoing commitment to increased transparency in the management of public resources, attention to macroeconomic stability and the implementation of the government's own plans.

Unfortunately, the slow pace of implementation of key structural reforms such as tax, public sector and pension has caused the country to be ineligible for budget support since mid-2011.

As a result, and to our great disappointment, we have been forced to withhold as much as €53 million, or over J$6.2 billion, of much-needed grant funding since. However, this money is not lost yet. Jamaica can still access it if the key reforms are implemented quickly and decisively. Positive and fruitful discussions with the IMF (International Monetary Fund) are of critical importance for this purpose, but will not suffice alone to unlock the disbursements.

But let me be clear on one point: the EU cooperation in Jamaica is not frozen, it's just the budget support portion that is on hold. The projects continue to be implemented at a very good pace and the EU remains by far Jamaica's largest grant donor.

In 2011, despite the challenges that I've just explained, we still provided to the country about J$2 billion of resources. In 2012, until the end of October, we have already disbursed over J$1.2 billion.

This contribution is particularly meaningful if one looks at the key sectors where our support is concentrated.

Take agriculture, for example. When you make the comparison of the total value of Jamaica's agricultural budget in 2012, which is some J$3 billion (or €26 million), and that currently, €62 million, or over J$7 billion, has already been disbursed by the EU to the sugar sector alone over a five-year period, it illustrates the level of support we have provided to the country.

And that's not all. In 2012 we've signed on at least four new projects to support trade, natural disaster recovery, capacity building and, very importantly, the continuation of one of our most successful interventions, the Poverty Reduction Programme or PRP.

The PRPs - we're now at the third phase - are implemented by the Jamaica Social Investment Fund and seek to provide support for the improvement in socio-economic conditions and quality of life in volatile and vulnerable communities.

It focuses on improvement of infrastructure within communities in the areas of health, sanitation, roads and education and also on promoting the participation by community groups and other non-state actors in community activities

Health, on the other hand, is a relatively new sector of support for us. We're about to launch a project on maternal and child mortality that is worth €22 million (J$2.5 billion).

That's more than the annual capital budget of the Ministry of Health.

The project will support, amongst the other things, the creation of 11 High Dependency Units for mothers and newborns in the four regional hospitals, the Victoria Jubilee and the Bustamante hospitals, as well as the training of medical and non-medical personnel to properly operate them.

This is the tangible proof of our commitment to support countries in attaining the Millennium Development Goals or MDGs.

All these new initiatives amounting to over €53 million show that the EU remains engaged with Jamaica.

In the last five-year cycle (2008-2013), Jamaica has benefited from an astounding €310 million or over J$36 billion. About 40 per cent of these resources proceed from the European Development Fund and the balance from ad hoc special regimes designed to cushion the effects of the reforms of the EU sugar and banana trade regimes.

What is sure is that Jamaica will continue benefiting from support bilaterally, as well as through the regional programmes, but amounts will depend on the ongoing discussions on the EU multiannual budget.

So what should Jamaica do? First and foremost, considering the uncertainty about the future allocations, focus on the available resources as they are very substantial. Make good use of them.

Prioritise your needs and make sure that the funds are concentrated where they're most needed and where they can make a difference. Do the utmost to quickly restore the eligibility for budget support.

I want to challenge Jamaican businesses to look at the EU for opportunities beyond the traditional diaspora market.

This year, we celebrate the 20th anniversary of the creation of the European Single Market.

It is a little known fact that that its 500 million consumers make it not only the largest market but the market with the highest GDP in the world.

Furthermore, there are over 23 million businesses currently operating within this market, 20 million of which are SME (small- and medium-size enterprise).

We can provide cutting-edge technology and innovation in about every sector, and especially in the so-called green economy.

In conclusion, and to answer the question that I have provocatively proposed as title for this short intervention: Is the EU abandoning Jamaica? The answer is clearly no.

We still have a lot of resources that need to be planned, prioritised and brought to fruition.

But there is a lot more to our partnership than just development cooperation. Jamaica should leverage its special economic and political relationship with the EU.