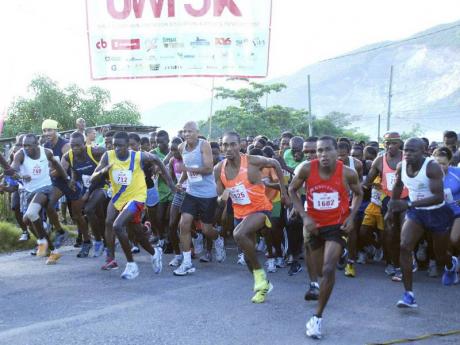 LIKE they did a week ago when they captured the top spots at the Portmore Burger King 10K Road race, Shawn Pitter, running unattached, and Tanice Barnett, representing MVP track club, won the male and female titles, respectively, at yesterday's inaugural UWI/CB Group Walk/Run and homecoming event at the institution's Mona campus.

The front-running Pitter made it a post-to-post affair, stopping the clock at 14 minutes, 11 seconds. The MVP pair of Daryl Oliver (15:17) and Rayan Lawrence (15:27) finished second and third, respectively.

"It was a nice race for me and the course was ok, despite it being a bit more difficult in the early stage than the Digicel Downtown 5K, as the first 2K was a bit challenging as I did two minutes 10 seconds which was a bit off the downtown event. But I picked up at the second 2K, where I got into my stride," said Pitter.

He further stated that he will be competing in the Wolmer's Boys' 5K this weekend, to help with his preparation for the Negril Marathon and 10K, the final events in the Grand Prix series.

Preceding the main race, Glen Mills, head coach of Racers Track Club, was honoured by the UWI for his contribution to their improvement in the sports. He was given a plaque and portrait of himself by Professor Gordon Shirley, principal of the Mona campus.

Both Shirley and Douglas Orane, honorary patron of the UWI's grand homecoming body and non-executive chairman of Grace Kennedy, were pleased with the day's proceedings.

"It was an outstanding run and we are very pleased to see the number of people who came out to support this venture," said Shirley.

"People understand that the occasion was a well worth venture because there are many students who are going to benefit from this as there are many who are in need and this will go a far way in assisting them," he added.

Orane said: "I am thrilled as the stars have aligned for this event as we have the world's fastest sprinters who work out at the UWI track and we have a great institution that we love and cherish and all who have been involved have come together to make this a reality.

"We are glad for the homecoming group, which has helped to connect the diaspora and have done it to help to reunite people to the UWI campus, so we can help to finance the sports programme at the University and helped those students in need," added Orane.