Back in recession - Jamaican economy contracts for third quarter 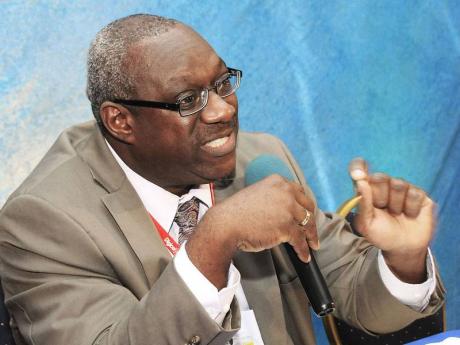 Most industries are expected to continue declining in the October-December quarter, even as the Planning Institute of Jamaica (PIOJ) reported that the Jamaican economy contracted by 0.6 per cent during the third quarter.

Even agriculture, which has consistently outperformed other sectors, shrunk by 0.5 per cent during the July to September review period, its first quarterly decline since the December 2010 quarter when the industry was severely impacted by Hurricane Nicole.

The downturn in the industry was partly attributable to drought in some of the major agriculture-producing parishes, especially during June and July, outgoing PIOJ Director Gladstone Hutchinson explained while reviewing the economic performance at the institute's offices in New Kingston yesterday.

It was the last quarterly briefing as head of the planning agency for Hutchinson. He heads back to the United States in the new year to his job at Lafayette University from where he was seconded to the PIOJ in mid-2010.

"I will be working hard until the end of January to complete some very, very special projects," said Hutchinson.

"The Planning Institute is very secure. We have outstanding senior leadership, a number of deputy director generals and senior directors who will continue the incredible tradition of the Planning Institute serving as the chief adviser to the Government in economic, social and environmental issues," he said.

Despite the underperforming economy, Hutchinson said he is satisfied that significant progress has been made since he announced two years ago the start of work to develop a short to medium-term growth-inducement strategy for Jamaica.

That expansion is still elusive.

The only sectors to have recorded growth during the September quarter were hotels and restaurants, up 2.3 per cent; finance and insurance services which grew by 0.8 per cent, and wholesale and retail trade industries, which increased by 0.4 per cent.

Moreover, Dr Hutchinson said those are the only sectors expected to continue experiencing growth in the fourth quarter.

For the nine-month period ending September 2012, real GDP is estimated to have declined by 0.3 per cent, which technically puts Jamaica in a recession. During the period, the goods-producing industry declined by 0.9 per cent and the services industry by 0.2 per cent.

The PIOJ head pointed out that the industries recording the largest declines during the nine months were mining and quarrying, down 8.5 per cent; construction 4.3 per cent and transport, storage and communication, down 3.2 per cent.

"The short-term prospects for the Jamaican economy is expected to be challenging due to the continued subdued performance for the global economy resulting in weakened external demand for Jamaican goods and services," Hutchinson said.

In addition, he said, the impact of Hurricane Sandy on the agriculture industry, as well as lost production time in other industries, will have a negative impact on real value added.

During the review period, real value added for mining and quarrying declined by 10.4 per cent, a reflection of the slowdown in the global economy, which negatively affected the alumina and aluminium markets.

This was reflected by a 57 per cent decline in housing starts and a decrease in the volume and value of mortgages by 45 per cent and 12.8 per cent, respectively.

Hutchinson said preliminary data for October 2012 showed inflation was 0.9 per cent, largely the result of higher prices for food and non-alcoholic beverages which rose 1.1 per cent, as well as housing, water, electricity, gas and other fuels which were increased by 2.8 per cent.

Preliminary data on the tourism industry suggested that airport arrivals declined by 0.9 per cent, while cruise ship arrivals increased by 18 per cent.

The data also indicated that bauxite production declined by 16.9 per cent, while bauxite exports contracted by 3.4 per cent.

Jamaica last emerged from recession in the first quarter of 2011, but returned to negative growth a year later in the March 2012 quarter.