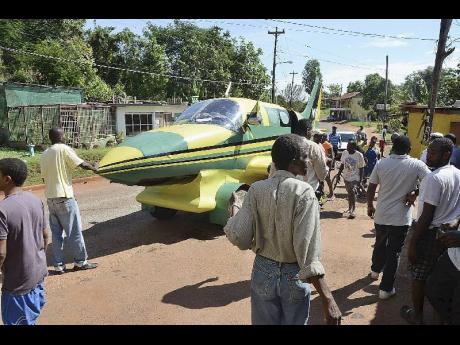 Scores of persons in Kitson Town square, St Catherine, stop to get a closer look at Sweet And Dandy as Archer and his crew passed through the community. 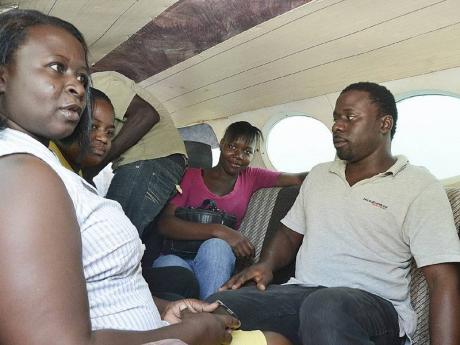 Some of Archer's neighbours, including his mechanic Nickarthur Miller (right), take their seats inside Sweet And Dandy, ready for the drive. 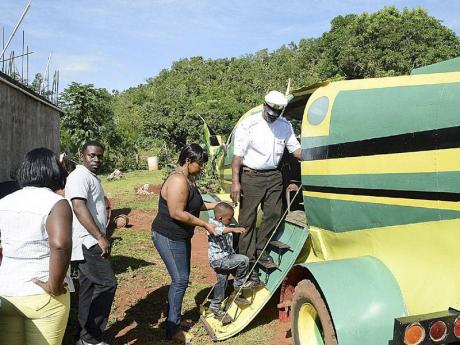 All aboard! Michael Archer assists some of his neighbours into Sweet And Dandy for a ride around the community. 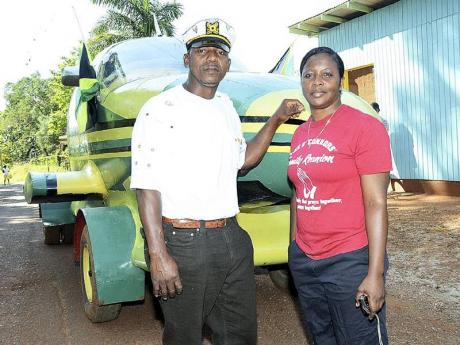 Michael Archer and his wife, Janet, stand beside Sweet And Dandy before taking it out for a drive in the community. - Ian Allen/Photographer
1
2
3
4

It's been three months since The Gleaner spoke with the man who took an aeroplane body and turned it into a car.

Well, Michael Archer's dream is flying high right now, fresh from his second trip to nearby Wynter's Park. Just Wednesday, he took the vehicle, Sweet And Dandy, and carried about 200 children around the park, getting a percentage of the admission.

"Wynter's Park contacted me after hearing about the plane. I've been getting a lot of calls from people and word has spread," he said. "You should have seen the children."

Now sporting the national colours, Archer and his team have upholstered the vehicle's seats and added an air conditioning unit. Sweet And Dandy is still the talk of Top Mountain and neighbouring communities, including Kitson Town, are also proud to claim it as their own.

"You know how much Gleaner sell in the community on August 13?" Archer asked, referring to the day the first story came out. After getting police permission to take his creation out on the road (still no licence), Archer and his team piled into it on Thursday with a few gleeful neighbours heading to Kitson Town square. But first, he stopped by the shop he owns with wife Janet.

"I thought it was a ridiculous idea at first because it would take a lot of time and money," she said. "But after he kept on working, I saw that it had potential."

She got more involved in the project and even helped in the upholstery changes. She is happy the community has rallied behind him.

"From he started people were very excited," she said with a laugh. "They said, 'A plane? In Top Mountain?' They loved it."

But shortly after The Gleaner's first visit, Archer suffered from a mystery illness.

"One day mi just feel ill, weak out inna mi body. So I spent two days in bed before going to the doctor," Archer recalled. He got injections and antibiotics but the pain wouldn't go away. He did an ultrasound and the doctor ordered an immediate surgery.

"I give God thanks and praise for the staff at the Spanish Town Hospital," he said. "One nurse said God neva ready fi mi yet because what she saw, I was a dead man."

The surgery kept him from working on the plane much over the past two months but his bullet-proof confidence hasn't waned.

And it shouldn't, considering the reception he got as he made the brief drive yesterday. Everyone wanted a look at Sweet And Dandy and quickly got out their camera phones, wanting to capture the moment. People were literally running out of their homes to catch a glimpse, especially of the new paint job.

"The first day we took it out, the place was 'ram'. Each time we come out, they surround us," Archer beamed.

He said he would next be installing lights (both outside and inside). The vehicle also needs a dashboard to spruce up the interior. He said he has received positive word from authorities that it can be licensed as its dimensions are compatible with small trucks. Apart from Wynter's Park jobs, other groups have booked him for rides.

He joked that he had to change the last letter of the plane's serial number (N19LP) to an 'R' because dependent on the angle, it may look like N1'JLP'. Archer is adamant there is no politics involved.

"Whoever want it to rent, wherever you want it, it's available. It's for anyone and everyone in Jamaica."

Look out for the community's reaction in this Sunday's Automotives.