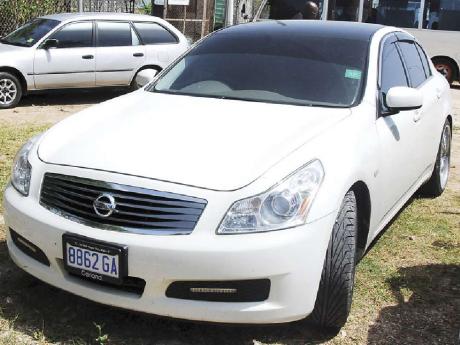 This vehicle was among a number of high-end vehicles seized by the Anti-Lottery Scam Task Force in a raid on a popular nightclub in St Ann. - File

After years of being awash with cash gained through illicit means, several St James communities are now faced with the harsh realities of returning to normal life amid the ongoing police crackdown, which has crippled the infamous lottery scam.

In Rose Heights, once considered a hotbed of scam activities, Pastor Knollis King, the councillor for the area and head of the community organisation Rose Heights Covenant of Peace, says scam-related activities such as the flashy glamour parties have now ceased.

"Things are back to normal … . Things like the glamour parties have stopped," King told the Western Focus earlier this week.

"However, while we can credit the situation to the anti-crime measures of the police, the State must now step in with the programmes to fill the void that has been created," added King.

In fact, in analysing the situation, King believes the inroads the police have made are now being undermined by the State's failure to implement projects to give the youth an alternative lifestyle.

"We have a number of projects, including a landscaping project, steel band, and a live stage band, but we are waiting on the Citizen Security and Justice Project (CSJP) for a meeting to determine the kind of support we will be getting," King said.

In Granville, which was considered the epicentre of the illicit scheme when it first came to the fore in 2006, the councillor for the area and deputy mayor of Montego Bay, Michael Troupe, is playing down the impact of the police crackdown.

"There are not a lot of parties taking place now, but I am not sure that there were many parties here in the first place," Troupe said. "I just think Granville is getting a bad rap."

According to Troupe, who has been representing the Granville community in the St James Parish Council since 1996, the community is the envy of the region as it is equipped to flourish without illegal activities.

"Everything that you want to assist young people can be found in Granville," said Troupe. "We have a HEART Trust/NTA centre, the Sam Sharpe Teachers College, and a CSJP centre, among other amenities."

As a way of ensuring that the youngsters
of Granville avail themselves of the training opportunities on offer in
the community, Troupe says he would like to see the State put measures
in place to assist with skill-training programmes.

"We
were trying to start some training programmes in tiling, masonry and
carpentry to equip our youngsters for the world of work," said Troupe.
"The youngsters want to be paid, and this might be something that we
should examine to get them to settle in and properly qualify
them."