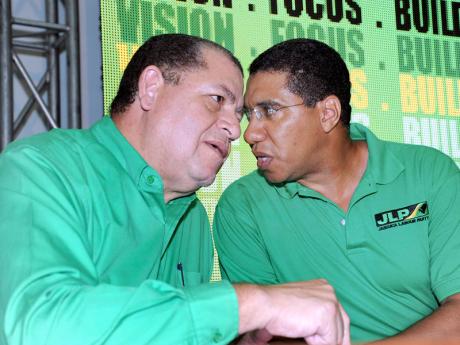 JLP leader Andrew Holness (right) and one of four deputy leaders, Audley Shaw, will know today the other officers who will join them in the leadership of the party.-File

Bartlett, Smith, Montague and Chuck in sprint for chairman's job

Political historian Troy Caine has firmly affixed his stamp of approval to the unprecedented nature of today's election of a new chairman at the meeting of the Central Executive of the Jamaica Labour Party (JLP), at the organisation's Belmont Road headquarters.

Political history is set to be created when the Central Executive meeting gets under way in what promises to be a captivating contest.

Several stalwarts will be vying to fill pivotal posts in the JLP in elections constitutionally due at the first meeting of the Central Executive, following the party's annual All-Island General Council meeting - commonly referred to as the Annual Conference.

The JLP is seeking to forge ahead with renewed vigour on its path to renewal, following a challenging year of introspection, laced with controversies.

None of the expected last-minute fall-outs in the chairmanship race materialised, setting the stage for a fascinating day.

Four men, ages ranging from 69 to 47, are on the hunt for the chairmanship post — the second most powerful in the party.

Edmund Bartlett, Derrick Smith, Delroy Chuck and Robert Montague have been nominated for the post and chairman of the JLP's Internal Election Commission, Tom Tavares-Finson, the man charged with organising today's ballot, told The Sunday Gleaner that all is in place.

"The system is well advanced. The ballots have been printed; they are numbered and are secured," said Tavares-Finson.

"We expect the voting process to move smoothly in a manner that each candidate will have confidence in the process."

For Caine, the high number of candidates vying for the chairmanship this time around serves as a strong signal of a vibrantly resilient force, given the crushing defeat the JLP suffered at the hands of the People's National Party in two national polls within a three-month period.

"What it signals is that democracy is alive and well, for a party that was vanquished and has got back on its feet speaks to a degree of activity within the organisation," argued Caine.

"For a long time, there have not been many contests in the past involving the election of a chairman for the JLP as (over the years) the individual was 'selected'," said Caine.

He cited Bruce Golding, Oswald Harding and E.C.L. Parkinson, a former speaker of the House of Representatives, who were all approved by the party leader and ratified by the Central Executive in place of a contest.

Caine also noted that over the years, for the most part, it was ageing stalwarts who were selected to be chairmen; not so this time around.

"Among them are younger persons. It's a good thing for the party," he asserted.

"Quite frankly, I don't see anything wrong with a contest, as long as it is clean and devoid of irregularities," Caine argued.