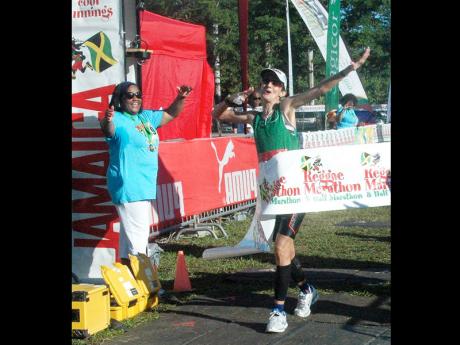 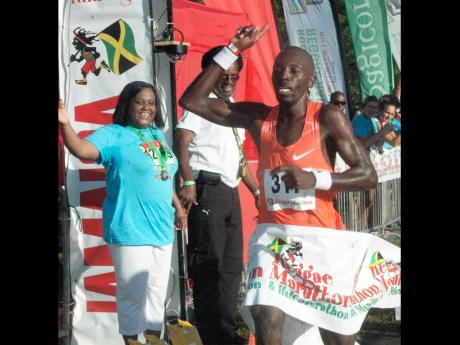 While he was happy with his win, the super confident Green, who beat fellow Jamaicans Colin Graham (3:10.28) and Brian Baker (3:10:56) in second and third places respectively, was somewhat disappointed with the quality of the field.

"I knew I was going to win but I was disappointed that there was no one to push me," said Green, who took home the Bob Marley Trophy. "It is kind of hard to run great times if there is nobody there to push you."

For Pilar, who took home the Rita Marley Trophy for taking the event ahead of Jamaicans Arieta Martin (3:26.18) and Karlene Blagrove (3:36.29), it was an experience of a lifetime.

"It was a fantastic experience, the people along the route were absolutely wonderful," said Pilar. "This must rate among my most enjoyable marathons ever."

In the secondary event, the half marathon, Jamaica swept the top three places in the male category with Gregory McKenzie taking the event in 1:11.06 followed by Kevin Campbell (1:16.30) and Kemar Leslie (1:18.13).

"It was a lovely event for me, I really enjoyed myself out there," said McKenzie, the nephew of former middle-distance kingpin Linton McKenzie.

In the female 10k, which featured Jamaica's minister of sports, Natalie Neita-Headley, there was another Jamaican sweep. Tanice Barnett won in 37.23 followed by Chevaughn McDonald (37.52) and Monique McPherson (36.37).

"I never knew I was that fit ... I surprised myself," said Neita-Headley, after completing the event. "This is a fantastic tourism product ... it is great for Jamaica."

Meet organiser Alfred Francis was thrilled with both the quality of the event and the fact that it attracted some 36 countries.

"This is definitely the best of the 12 Reggae Marathons we have had ... it was just fantastic," said Francis. "I must commend my support staff and the volunteers for their excellent work here today."