Motorists to pay for air as gasolene margins fall 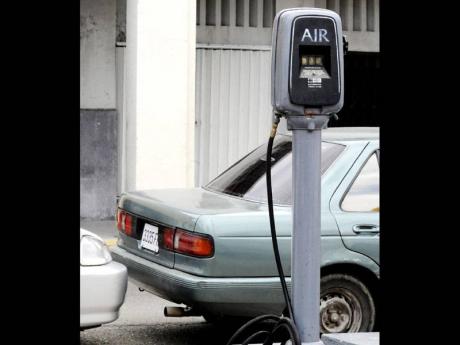 President of the Jamaica Gasoline Retailers Association (JGRA) Derrick Thompson said Monday that retailers have seen a 20 per cent fall-off in sales in the last 12 months, resulting in increased competition among some 300 service stations to maintain returns.

Thompson said retailers have responded by cutting margins as consumers were spending the same amount of money on gas purchases as they did before prices moved to their current levels on the international market.

"Part of it is that since there was an upward movement in gas prices, people who are working the same (amount of) money have not changed their budgets. Their income is not growing. They are saying, 'I have the same $2,000 to spend on gas and that is where it stops."

At last estimate in 2007, Jamaica's consumption of the 87 and 90 blends of gasolene was 4.1 million barrels, declining from 5.9 million barrels recorded for motorists in 2003.

Meanwhile, the JGRA has decided, effective January 2013, to attach a cost to the use of air pumps by installing token-operated air scales. The association said 60 per cent of all service stations and some marketing companies will be implementing the measure to recover maintenance costs for the pumps, which it said account for between 10 and 20 per cent of their electricity bills.

"We are having tremendous problems keeping our costs down," Thompson said.

"We are looking in the region of charging $50 for use, which is unlikely to cover light bills, which range between $80,000 and $100,000 monthly," he said. "There are huge abuses of the pumps as well, as half the time the hoses and other fittings are stolen. These are consumables that you have to buy back."

With the general fall in retail sales, Thompson said dealers "will compete more vigorously for smaller volumes", adding that "we are seeing some of that out there".

The unpredictable nature of oil price movements, he said, has affected both consumers and retailers alike.

Thompson said the JGRA has also made no progress in getting local marketing companies to explain the logic behind pricing zones and variations in costs from one station to another.

"We have been attempting to find out the criteria for these zones," he said. "There are no answers forthcoming. You and I can be beside each other, but the prices are different. Most of the marketers establish guidelines such as transportation factors. That we understand fully well.

"But, when you are in Kingston and we are beside each other and the price is different, that is very disadvantageous to the dealers. There has been no progress at all. They say it's their prerogative to set the prices they want to," the JGRA president said.