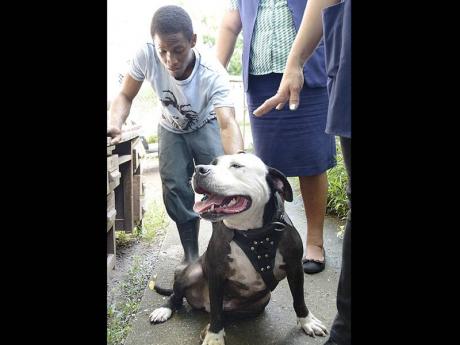 Staff at the Jamaica Society for the Prevention of Cruelty to Animals say this five-year-old pit bull Milo is great with children. Like all dogs, it can become aggressive, especially if it feels its territory or master is being threatened. - Ian Allen/Photographer 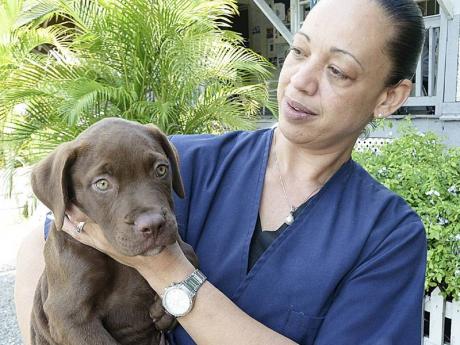 Pamela Lawson, managing director of the JSPCA, holds a young pit bull terrier brought in to get its first shots. Lawson believes with the right care and socialisation, the breed, known for its aggression, can be controlled. - Ian Allen/Photographer
1
2

Pamela Lawson, managing director of the Jamaica Society for the Prevention of Cruelty to Animals (JSPCA), is disagreeing with calls to ban certain dog breeds.

The calls have come since the mauling of two-year-old Ronicka Gregory in St Catherine by a pit bull terrier.

Some animal experts, including Dr St Aubyn Bartlett, want registering of all dogs and legislation for specific breeds considered dangerous.

Lawson agrees Jamaica's animal laws are antiquated and some registration is needed, like the fact that there is no legal requirement for persons to breed dogs. But she suggests a ban on specific breeds is not the answer. She said any dog can become aggressive, even shih-tzus and poodles, if they are not properly socialised.

Lawson refutes claims that dogs like pit bulls and Rottweilers are the most dangerous.

"We have seen a tremendous increase in the number of dog attack cases over the last few years and the majority of them are your good old mongrels," she said, opining these dogs are most likely to be found in groups.

"Like wayward teens, they are going to get up to mischief," she reasoned, assuring that the majority were not violent.

Lawson said even a house-broken, well-groomed dog can snap because something a human did triggered the reaction. To underline the point, her colleague Dr Paul Turner pointed to the dog which mauled young Ronicka.

"This dog showed no sign of aggression when we brought him in," he said.

"He even came up to me and licked my hand."

Lawson admitted the size of the infamous breeds adds to the negative stigma (a grown pit bull can weigh up to 100 pounds). Lawson said some people were getting these breeds for security but others were following a fad.

"But they don't realise how strong the animal is. They can easily become unmanageable," she said, noting the JSPCA had picked up many that were abandoned.

Lawson owns a Staffordshire bull terrier, one of the many types collectively, and somewhat incorrectly labelled as a pit bull. She said owners had to stop their dogs' bad habits early, just like with a child.

"Some dogs are very 'mouthy' when they're young. So they're always biting your trousers and things like that. You have to stop that," she said. "When he's four or five pounds, it looks cute. But when he gets to 100 pounds, you have a problem."

Lawson said all dog owners had to set the boundaries for their pets and called for proper fencing of homes, so the animals don't wander around. She advocated for proper sanitation, medication and nutrition.

"It all boils down to responsible ownership. I don't believe in banning any animal because of poor ownership," she said.

"The price for them will soar and people are going to buy them because then it would be taboo," she reasoned.

Lawson said the JSPCA get plenty of calls from persons asking them to remove dogs. But she said the body could not intervene unless they got the go-ahead from the authorities.

"We have no legal right to just go and take away people's animals," she stressed. She said residents had to speak out when there are incidents with animals.

"Go to the police. File a report. Advise your community members. When the police get tired of hearing the reports, they will call us to remove the animals," she said. "People must make their voices heard."

The JSPCA pointed out there were some signs when a 'normal', well-mannered canine might attack someone:

The JSPCA also recommends removing the animal to its enclosure until the individual departs.