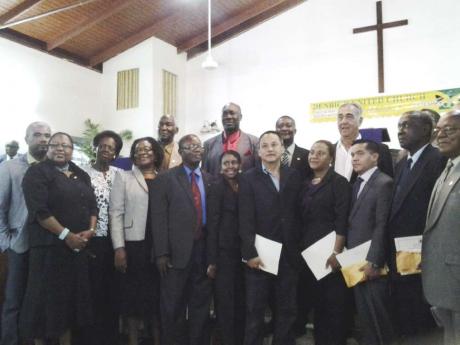 Newly appointed justices of the peace pose with Custos of Clarendon William Shagoury (fourth right, back row) after their recent induction. - Photo by Horace Fisher

THE NUMBER of justices of the peace (JPs) swelled significantly with the induction of 19 new JPs last Wednesday's afternoon, but they were immediately warned to uphold the office's high moral standards and also encouraged to facilitate community-based restorative justice programmes.

"It is very reprehensible that a JP would tarnish his or her own name and cause the office of JP to fall into disrepute. Rogue JPs will feel the full force of the law that they have sworn to protect," warned Carol Palmer, permanent secretary in the Ministry of Justice, during yesterday's induction ceremony at the Denbigh United Church in May Pen, Clarendon.

She cautioned: "Don't let your spouses or the children use the seal, and report missing seals immediately because if it is found that a seal is in used by someone other than the appointed JP, that JP would be culpable of a crime."

The permanent secretary said that the justice ministry is in a transformation mode and JPs would play a more significant role in the dispensation of justice, especially at the community level and in restorative justice programmes.

"Jamaica's justice system has been undergoing some form of transformation. This transformation is geared towards improving the physical and technological infrastructure to enable the introduction of smoother processes in the justice sector," Palmer said. "Therefore, there is a central role for JPs in this reform programme," she told the gathering during the induction ceremony.

In her address, she pointed to the Ministry of Justice's restorative justice pilot programmes in Russia in Westmoreland; Trench Town, Tower Hill and August Town in Kingston and St Andrew; March Pen, Ellerslie Pen and Homestead in St Catherine; Granville in St James; and Effortville and Canaan Heights in Clarendon. She asked JPs to volunteer in the various islandwide programmes

The 19 new inductees - who included restaurant magnate Jukie Chin, attorney Eureka Douglas and other prominent Clarendonians from the business, civic and the religious community - were also warned by Custos of Clarendon William Shagoury to carry out their duties without fear and/or partiality. He also encouraged the new inductees to join the Clarendon's Lay Magistrates' Association.

"I am warning you to be on the lookout for rogue JPs, who are knowingly signing fictitious documents, especially for a fee. Report them to me and they will be dealt with," Custos Shagoury advised the inductees.

'I am warning you to be on the lookout for rogue JPs, who are knowingly signing fictitious documents, especially for a fee. Report them to me and they will be dealt with.'