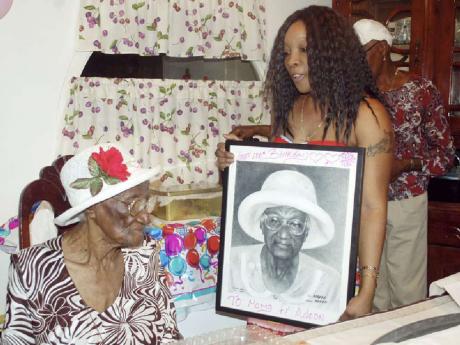 Centenarian Lydia Cunningham-Townsend looks at a painted portrait of her presented by granddaughter Adeon Graham.

Except for occasional pain in her joints, Lydia Cunningham-Townsend of Water Works, Westmoreland, who takes on several daily activities - including cooking, sweeping, making her bed, and even bathing herself - belies the fact she has just passed her 100th birthday.

"I have no sickness," said Cunningham-Townsend, who is popularly known as 'Miss Liddy'. "The only medication I am on is the painkillers for the joint pains."

Last week, relatives and friends converged on Miss Liddy's home to celebrate her enviable milestone, and to the delight of those present, the sprightly centenarian, who still has excellent vision, hearing, and speech, was able to interact with them without much bother.

"The doctor has diagnosed a slight trace of diabetes," said Evelyn Townsend-Palmer, who is the seventh of her 12 children. "But I don't think she have any diabetes, though."

Miss Liddy, an ardent Christian, who worships at the Holiness Christian Church in Water Works, is still able to go into her backyard, cut a bunch of bananas and drag it to the kitchen, where she cuts off the hands for cooking.

This centenarian, who was married to the late Alfred Townsend, was born on November 20, 1912, on the same property where she now resides. She attended the Coke's View School, which has since been relocated from Whithorn to its current location in Water Works.

Miss Liddy's husband, who fathered her 12 children, predeceased her in 1984, having reached his late 70s. The centenarian has already outlived six of her children.

"Awesome," said daughter Winnifred Townsend, as she marvelled at her mother's longevity. "She is a loving and caring mother and we all love her very much."

In reflecting on her long journey, Miss Liddy recalled her early life working as a businesswoman, trading ground provisions in Kingston. Later, she used to collect Jurdenis soft drink bottles, also for trade in Kingston. She also worked as a gas attendant before finally working as a cook at a private residence.

At the event held to honour her, family members, community well-wishers, and members of her church family showered accolades and prayers on Miss Liddy, who gave them a refreshing reminder of the importance of living a good life.