We won't pay in full! 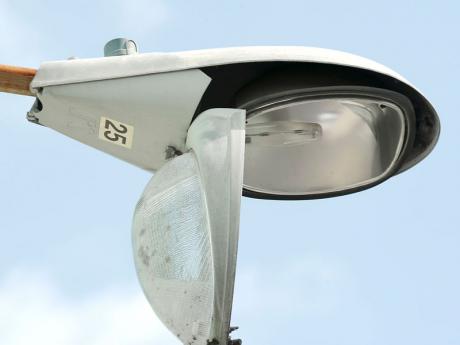 Although many streets and avenues across the island are in darkness, parish councils continue to receive multimillion-dollar bills for their lighting from the Jamaica Public Service Company (JPS) on a monthly basis.

With no accurate audit of working lamps available islandwide, the councils have told the local government ministry not to honour the bills in full.

The Government has agreed with the councils and is withholding an across-the-board 20 per cent on all parish council bills, The Sunday Gleaner has been told.

As a result, all councils have wracked up a $2-billion deficit with the JPS.

The municipal body with the highest bill and highest arrears to the JPS is the Kingston and St Andrew Corporation (KSAC) which gets a bill averaging $58 million monthly. Town Clerk Errol Green said the KSAC owes JPS $500 million - a sum which represents 25 per cent of that which is outstanding from all 14 parish councils.

"The bills are calculated on the number of lamps times 12 hours per day, times the wattage. Some wattages are different," Green told The Sunday Gleaner.

"But what I have been doing for years, since 1999 when I became town clerk, I used to tell the ministry (Local Government) to pay 10 per cent less than what I have been billed. I used to have an employee do an audit. It could be more now," he said.

According to Green, the JPS has expressed concern about the matter and offered to provide the KSAC with a vehicle. The council would pay the driver, so an accurate inventory can be provided.

To satisfy both parties, the local government ministry and the JPS have agreed to a memorandum of understanding (MOU) to produce an audit of the existing lamps to determine functioning lamps in the system. Payments for light emitting diode (LED) bulbs and regular bulbs are part of the dispute surrounding the JPS and the councils.

In its defence, the JPS has pointed finger at the Office of Utilities Regulation (OUR), saying the company uses a rate schedule approved by the utility watchdog agency.

But Callum's explanation again raises questions about the effectiveness of the OUR.

"In the absence of a rate specific to LED lamps in the rate schedules, the rates applied to these lamps are the same as the OUR approved rates that apply to customer-owned streetlamps that are billed based on metered consumption," she explained.

According to Callum, the "JPS does not regularly disconnect streetlights for non-payment. Significant sums are outstanding for streetlights, which have remained connected".

She said councils were in significant arrears with the payment of their streetlight bills, but both JPS and the parish councils recognise that there needs to be better monitoring of streetlights. As a result there was agreement to the
MOU. The audit would start as soon as the MOU is signed.

Part of the MOU will see a pilot project in Clarendon and will involve individuals from the councils and the JPS. A current list will be provided for all authorities, but it was not immediately explained how many teams would be engaged and the period of the audit.

It is an audit that cannot come too quickly for Christopher Powell, secretary/manager of the Manchester Parish Council, who said that council pays an average of $16.1 million monthly.

"Unfortunately, in the past, we have been relying on them in terms of their billing. We never really used to question it. In the last few years, however, we have been questioning it and we have actually done our own audit, " said Powell.

"We have had discussions with them (JPS) regarding the lights that are blown. What is obtaining now though is that there is a protocol between the JPS and the councils where we ask persons in the community to report lights that are working. We pass that information along to the JPS for them to conduct repairs," added Powell.

However, nighttime travel on several roads and avenues across the country find a number of lamps not working. Some roads have been in darkness for years, while the councils get a fixed bill.

Recently, transferred from St Catherine to Manchester, Powell said the bill to the St Catherine council was an average of $30 million monthly, but that council was also not able to quantify the number of working lamps.

Other councils polled by The Sunday Gleaner confirmed that they are charged for the number of lamps at a specific wattage between the hours of 6:00 p.m. and 7:00 a.m. but neither themselves nor the JPS can say if the bills generated each month accurately represent working lamps.

"Your polls have accurately captured what happens across the councils. Normally the light bills I know will be between $5 and $8 million, that's the general range. They charge a fixed fee for light whether it is on or off," said David Gardener, secretary manager at the St Elizabeth Parish Council.

Gardener said his council, like all others, is indebted to the JPS because it collects insufficient funds from property taxes.