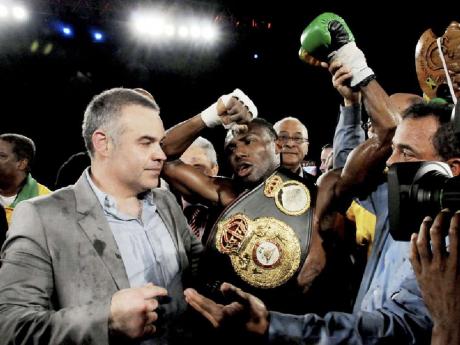 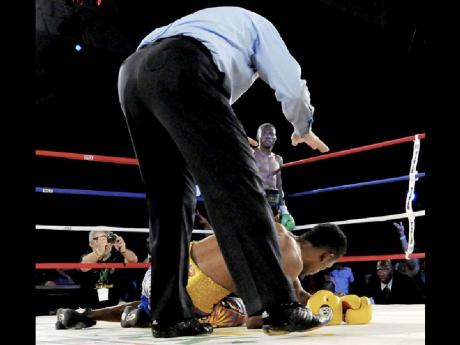 Referee Estaban Ramos delivers the count as Colombia's Daulis Prescott gets knocked to the turf by Jamaica's Nicholas "The Axeman" Walters, during their World Boxing Association featherweight title fight at the National Indoor Sports Centre in the wee hours of Sunday morning. 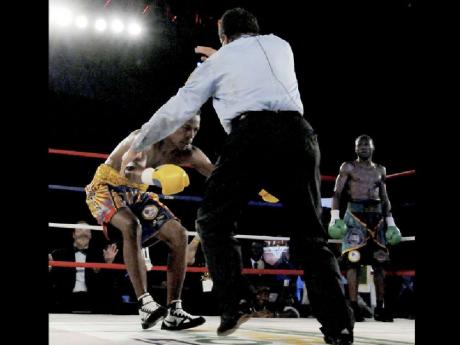 Jamaica's Nicholas "The Axeman" Walters looks on as Colombia's Daulis Prescott is sent tumbling to the turf, while referee Estaban Ramos reacts, during their World Boxing Association featherweight title fight at the National Indoor Sports Centre on Sunday morning.
1
2
3

He did it! Nicholas 'The Axeman' Walters became the World Boxing Association (WBA) featherweight boxing champion last Saturday night, in the main bout of a five-fight card promoted by SportsMax and approved by the WBA and the Jamaica Boxing Board of Control.

On a fight card, dubbed the 'Wray and Nephew Rumble on Jamrock', at the National Indoor Sports Centre, Walters scored a dramatic seventh-round TKO victory over a game Daulis Prescott of Colombia.

Walters stopped his man 35 seconds into the round and in accomplishing this feat, he became the ninth Jamaican to win a world title.

The Jamaican fighter was ahead on the scorecards of all the judges when the fight ended. Judges Octavio Rodriguez and Carlos Sucre had it 60-52, while judge Gloria Rizzo's score was 59-53.

He also had the distinction of being the first to do so in Jamaica
and now has a 22-0 record with 18 KO's.

"I wanted to
do this for Jamaica's 50th Independence anniversary celebrations and I
am glad that I was able to," an elated Walters told The
Gleaner after the fight.

Following a
sizzling performance from Sizzla - who brought down the house - and
later accompanied him to the ring, Walters started his quest for a world
title at 12:12 Sunday morning.

Twenty-four minutes
and 35 seconds later, he became a world champion, the culmination of a
journey as a professional that started on August 2, 2008, when he
defeated Estaban Ramos over four rounds in
Panama.

Walters gave a workman-like performance,
starting methodically and using his jabs to good advantage to score some
early points. Prescott also looked sharp and mixed his jabs with hooks
to the body that sent his own message to the Jamaican that it could be a
long night.

The Jamaican stepped up the pace in the
second round by throwing double jabs and occasional combinations to his
opponent's body, but Prescott came right back with his own two-fisted
attack. He delivered one particularly hard hook to the body, but Walters
answered quickly with a good counter-attack. A low blow near the end of
the round by Prescott drew an angry verbal response from Walters and a
caution from referee Rafael Ramos.

There was a lot of
action in the third round, as both men challenged each other. Walters
landed a hard right to the body near the end of the round that was
countered beautifully by Prescott.

Walters stepped up
the pace appreciably in the fourth, attacking body and head
relentlessly. Prescott was put on the canvas and he took the mandatory
eight count. He did not seem to be badly hurt, however, and fought back
gamely.

The hometown
fighter came out with blazing fists in the fifth and chased his man
around the ring aggressively. A left hook put Prescott down again, but
he rallied once more and kept himself in the fight with good boxing
skills.

Walters eased the pressure in the sixth,
choosing to score with his jabs, but this proved to be the calm before
the storm.

As the bell for the seventh round rang, he
was out of his corner like a flash of lighting, throwing 'bombs' with
both hands. There was a furious exchange as Prescott fought back, but
the fight ended with Walters throwing a brutal, short left hook to the
body that put Prescott on his back. He rolled over, got on his knees and
lifted himself from the canvas laboriously as the count reached
eight.

He was on rubber legs, however, and sensing
this, referee Ramos, who did a fine job, called a halt. It was all over
and Walters was the new WBA featherweight champion.

He
celebrated by jumping on the ropes and waved to his wildly cheering and
adoring fans. He then rolled on the canvas and was lifted to his feet
by his trainers, Celso Chavez, Wilford Gonzalez, and father Job
Walters.