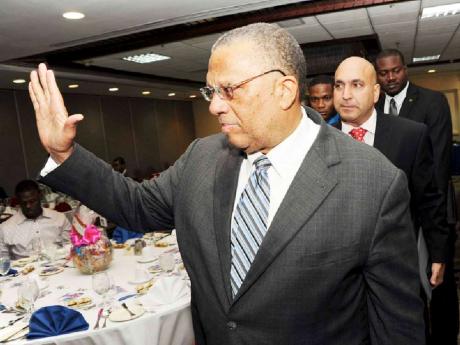 Dr Peter Phillips, the minister of finance, salutes upon arriving at the Wyndham hotel in St Andrew for the annual members luncheon of the Private Sector Organisation of Jamaica (PSOJ). In the background is the PSOJ president, Chris Zacca. - Ricardo Makyn/Staff Photographer

The country's finance minister, Dr Peter Phillips, yesterday warned that the Government would not sit idly by and allow speculative pressure to build up on the Jamaican dollar.

Addressing the annual members luncheon of the Private Sector Organisation of Jamaica (PSOJ) at the Wyndham hotel in St Andrew yesterday, Phillips explained that the Government took the decision to pursue policy options that support low interest rates.

The result, he said, was that there was no sharp adjustment to the monetary policy

"But we will not hesitate to utilise other options should speculative pressures build up to unacceptable levels," he declared.

"We will ensure that order is maintained in our foreign-exchange markets and what I ask is that we all should not hedge against the Jamaican dollar," Phillips said.

The result is that the country's total debt stock increased by approximately $25 billion over the six-month period.

Meanwhile, Phillips said he still entertained the hope that Jamaica can secure a staff level agreement with the International Monetary Fund before the end of the calendar year and formal board approval early next year.

The minister said he is satisfied that Jamaica's negotiating team, that is currently in Washington, is "making steady progress".

"The issues outstanding relate to some prior actions which we are trying to finalise in order to secure the best deal for the country," he reiterated.

Acknowledging that the country is facing numerous economic challenges, Phillips sounded a positive tone as he addressed private-sector leaders.

"There is no need for us to languish in the grip of panic or negativity. We shall overcome," he declared.