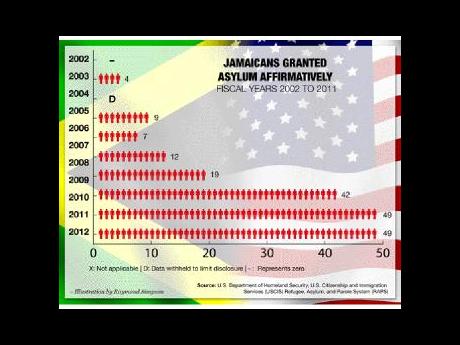 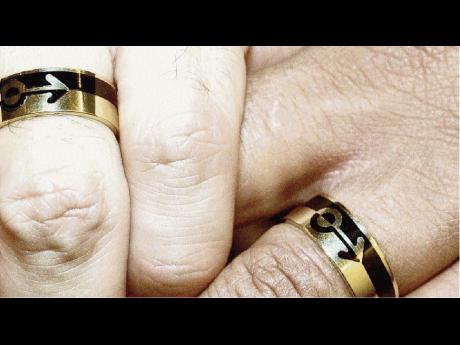 Packing up your life in a suitcase and travelling 581 miles to start all over again were options Larry Chang, Dadland Maye and Nicholas Thompson never considered while growing up.

But despite being born 'free men' in their country, Jamaica, they decided to flee to the United States (US) as adults because they are homosexuals.

Dadland Maye says before going to America his life was filled with fear. It was also threatened regularly. Growing up he was taunted with names.

As a teenager his face was disfigured by an older male, who called him a 'faggot' then followed it up with a knife wound.

As an adult, he was stoned and his house burnt after receiving threats from his neighbours. One of them was a policeman.

"Years ago, I was lying in my bed in Portmore and just dreaming. While I was dreaming, thinking that I was in the clouds, like a mythical creature, I felt a heat and the heat became stronger, strong enough to wake me out of the dream.

"When I opened my eyes, I realised that my house, the curtain window, my bedroom was on fire."

Maye's scarred face reflects the pain, as he recounts the heat becoming unbearable and his dream becoming an instant nightmare. He awoke frantic and as he looked outside he saw a group of men waiting. His mind dithered between living and dying.

He ran outside and the men, some armed with guns, attacked him. He survived.

Maye's story is not dissimilar to Chang's.

Chang, 62, one of the founding members of the modern gay movement in Jamaica, was forced out of his rural community in 2000 after being told to move or his house would be burnt.

"I got word that the villagers had decided that I should no longer be a part of that community and that they were gonna get me out," Chang said. And they did.

Chang flew to the US, living in Atlanta for a while, before settling in the Petworth community of Washington, DC. He was granted asylum in 2004.

Jamaica's history of its attitude towards members of the lesbian bisexual gay and transgender (LGBT) community is well documented.

The issue has run the gamut of affecting every class in Jamaica.

The island's premier LGBT lobby, the Jamaica Forum for Lesbians All Sexuals and Gays (J-FLAG), has claimed that there has been an increase in attacks against members of that community.

They say 51 individuals were attacked between January and June of 2011 because of their sexuality. According to J-FLAG, it usually receives between 30 to 40 reports of abuse annually.

The Jamaican police have not confirmed this figure, as they do not tally whether the motive for a crime is homophobic.

Some who are affected are joining a growing number of Jamaicans who are fleeing to the US to seek asylum.

The US Citizenship and Immigration Services (USCIS) says a person is eligible to apply for protection in America if they have suffered persecution or fear they will suffer persecution due to race, religion, nationality, membership in a particular social group or political opinion.

Since 2006, there has been a steady increase in the number of Jamaicans who were granted asylum in the US, according to the Department of Homeland Security Yearbook of Immigration Statistics.

The USCIS does not provide a breakdown of the reasons for the granting of asylum to individuals.

However, Immigration Equality, an organisation which provides free legal service to LGBT asylum seekers, says that they have helped 80 Jamaicans gain asylum between 2006 and 2008.

Chang, who received asylum four years after arriving in the US in 2000, describes the process as straightforward, stringent, but lengthy.

"The stress of having your life in the balance, your life dependent on somebody's decision, and you don't know if you're going to get a yes or a no," he said bothered him.

Dadland Maye and Nicholas Thompson lived in the US for several years undocumented, because they were unaware they could be afforded protection under US asylum laws.

Maye, who arrived in 2001, said the transition to the US was taxing on several levels. The New York resident says that being illegal meant he secured work unconventionally.

"During those times I washed dishes, I cleaned people's floors, I did all the work, so-called dirty work. I was paid under the table," he said.

Maye said there were a lot of social rules, which he flouted initially.

In Jamaica, people are affectionately physical, in America they don't like to be touched.

In Jamaica, he could wax eloquently in his native dialect; in America he has to repeat himself several times, with the outcome sometimes resulting in misunderstanding.

Maye, who grew up in both rural and urban areas in Jamaica, said he also had to rely on others to subsist, as he was undocumented. Friends had to turn his light and gas on. To get a cellphone meant he had to ask others.

"The good part of Jamaica is that you have community, someone who lives down the road, you know their name. Over here, especially in New York, in these high-rise buildings, you might live beside someone for many, many years and you never ever see them," he said.

Maye was eventually granted asylum in 2009, after hearing about it from other members of the Jamaican LGBT community.

The men describe a network of LGBT Jamaicans who assist each other with information useful in navigating the foreign American society.

He said the network involves lawyers, who give free legal advice. Thompson has since told 11 other Jamaicans about the process.

The application process for Thompson and Maye involved some risk as US asylum law stipulates that a person must file application for asylum in the US at least a year on from their arrival.

While arriving in 2004, Thompson did not receive asylum until 2008.

Both Maye and Thompson, who are friends, said they knew they risked being sent back to Jamaica, but it was a risk they viewed as worthy.

'It (application process) was difficult because everything has to be supported. They really want to know that this is really authentic, that these situations happened to you," Thompson said.

25 per cent of caseload

While Jamaica does not have laws against homosexuality, it does have a law, which makes buggery illegal: the Offences Against the Person Act.

The law, which is derived from England's Buggery Act of 1533, was passed down to Jamaica through its colonial past.

While the law is rarely used in Jamaica, some homosexuals claim it is used to harass them, as they are threatened with being brought before the courts. If a person is found guilty, the law carries a maximum penalty of 10 years with hard labour.

The law is also backed in Jamaica by a strong cultural sentiment that homosexuality corrupts society. This school of thought is enforced through Jamaica's strong Christian culture.

The Reverend Lenworth Anglin, convenor of the Umbrella Group of Churches, said that Jamaica's culture of denouncing homosexuality is borne out of its Christian tradition.

"The Bible denounces homosexuality and lesbianism.

Anglin also argued that gay Jamaicans are not being forced out of the island. He said while there might be 'pockets' of homophobia, there is not an orchestrated effort to evict them.

"While the Church feels strongly, we don't ask them to leave, we ask them to change," he said.

And despite pressure from Britain and the United Nations Human Rights Committee for Jamaica to remove the buggery law from the books, this has not been a priority for any political administration.

But even if the buggery law is removed, the gay men granted asylum in the US have no plan to return home.

"I would go back when attitudes change, and I say attitudes and not the law. They may want to decriminalise buggery, but that's only one step. It's the attitudes, and frankly I don't see those attitudes changing any time soon; it's going to take several generations" said Chang.

Even with a majority consensus against who they are, Maye misses the natural beauty of Jamaica.

"I remember trees, a lot of trees, rivers, nature, flowers all around, beauty. Over here that's kind of different; the fruits, mangoes, don't taste the same way. Where I am there are no rivers to swim in, here I have to take a train to the beach," Maye said.

Despite the drawbacks, the men are delighted with the opportunity they have in the US to live a more open life.

Mark Beckford produced this piece following his completion of a 2011 Woodrow Wilson/Washingston Post fellowship. The full article was published on the Woodrow Wilson website.