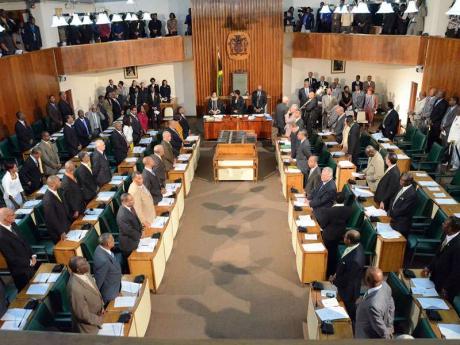 An abysmal failure is how some prominent political observers have rated the performance of the Government and the Opposition in 2012.

The analysts suggest that the Portia Simpson Miller administration is still struggling to find its footing 12 months after being swept into office, while a languid Opposition appears at a loss.

"One gets the impression that the People's National Party (PNP) was just as surprised at winning the election as the Jamaica Labour Party (JLP) was at losing," asserted noted attorney Frank Phipps, a former member of the JLP.

"The Government remains distant, remote and out of touch with the needs of ordinary people," declared Dr Hume Johnson who graded the Government five out of a possible 10 points.

Johnson gave the Opposition four out of a possible 10 points for its performance this year.

Professor Anthony Clayton argued that it was unlikely that the Simpson Miller led-administration would produce much in its first year given its lack of achievements during its first 100 days in office.

"If they have not generated significant momentum in the first 100 days, the rest of their term of office is unlikely to be marked by high achievement," argued Clayton, a university professor.

He said the 100-day benchmark is a useful measure because it indicates whether an administration has come into office with a clear sense of what needs to be done and the energy to take control of the agenda.

For political analyst Richard 'Dickie' Crawford, the PNP has not used the "overwhelming mandate" it was given as well as it should.

"This extreme vote of confidence in two national elections has been
squandered (by the PNP), while not consulting effectively with the
people and pursuing some of the same old practices and strategies of the
former Government which was rejected by the voters," complained
Crawford.

He said the greatest weakness of the PNP
administration has been its mishandling of the courts and justice
system, the delay in modernising and passing the necessary legislation
to promote a more effective fight against crime and its failure to
stimulate economic investment and development.

"There
have been successes in police work due to the doggedness of some
officers, but the innovations which were promised in national security
are still to be seen," said Crawford.

He further
charged that the Government has not done as well as it should in dealing
with the economy.

"The previous IMF (International
Monetary Fund) agreement and subsequent economic fallout was well known
when the Government came to office, yet they have used the same approach
and same advisers which helped cause the problems in the first place,"
Crawford charged.

He said more decisive action is needed in the
national interest on the basis of shared sacrifices rather than
apparently trying to satisfy varying special
interests.

"A debt forgiveness and effective
management strategy must be pursued too."

Crawford
argued that the Government is appearing to be arrogant and not people
supportive, even after being warned by former Prime Minister P.J.
Patterson.

"This shows up in the posture taken as
regards the issue of corruption and the Office of the Contractor
General, the FINSAC casualties, the Ezroy Millwood and Jamaica Public
Service Company cases."

According to Crawford, the PNP
still has some support and goodwill, but cannot afford to squander
it.

The political observers also suggested that the
Government is languishing in a state of denial as its own grading of its
performance is in stark contrast to that of most
Jamaicans.

In a score sheet issued late last week, the
PNP claimed that the "Government has honoured the covenant it made with
the Jamaican people in the lead-up to last year's general election
victory".

But the analysts say that is not
so.

"In many ways, the Government appears rudderless
and not leader-driven," declared Johnson as she echoed the views of
others.

"It must, therefore, review its performance,
become much more self-critical and hold itself to account if it wants to
inspire the confidence of the people and justify its election to
office," Johnson added.

For its part, the Andrew
Holness-led Opposition has admitted that it was carrying out serious
introspection throughout the year and this should result in a more
vibrant and united party next year.

However, that has
not satisfied the analysts.

For Frank Phipps, neither
party seems to have settled down to a realisation that there is a
country to run and a people to lead.

"We need to see
the Government's road map for development that all of us must follow;
and an opposition also on the journey, holding the Government's feet to
the fire for performance and accountability," declared
Phipps.

That view is shared by Johnson, who believes
that both parties have not demonstrated the leadership which can inspire
confidence and pull the nation from the quagmire it is
in.

"The PNP leader speaks a good rhetoric at times,
and the organisation postures itself as the 'poor people's party'," she
contended.

"But to become credible in the eyes of its
constituents, it needs to follow this up with effective policies that
are designed to respond directly and aggressively to the myriad
challenges we face."

According to Johnson, the
Opposition remains mired in a protracted leadership battle, covert
though it is.

"This has distracted it from putting
forward its own positions and helping to tackle the economic challenges
that it had proposed it was better at doing," she
argued.

Johnson asserted that Holness needs to assert
himself and attend to the obvious bifurcation in his party, so that it
can posture itself as a reformed/reforming organisation and a viable
alternative.

That's a position shared by Clayton.
"With regard to the Opposition, perhaps the true measure of the stature
of a political party is whether it can make effective use of a period in
opposition," said Clayton.

"This is the time to take
stock, have a very frank internal discussion, and then take decisive
action. Why did the party lose the election? Are there old ideas that
need to be abandoned? Are there discredited former ministers who need to
be replaced?

"This kind of soul-searching may be
painful sometimes, but it is very necessary. A period in Opposition
should be seen as the time for renewal."

For Crawford,
the Opposition seems to have lost its way. He said the announcement by
Holness that the party is embarking on an election campaign was a
colossal political mistake in light of the circumstances
today.

"The Opposition needs to develop a relevant
philosophy for Jamaica and move from the traditional press-release
strategy mirroring 'we did it better' and offer some solutions for
moving the country forward," said
Crawford.