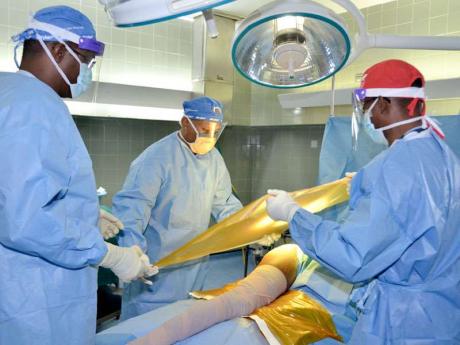 For the last 10 years, Joan Russell has lived with the bones in her hips degenerating. Her ability to walk become more excruciating as her life was destabilised by osteoarthritis.

They were among a group of seven persons suffering with severe pain, difficulty walking and problems stooping to tie their shoelaces who were scheduled to be retrofitted with total hip replacement by Dr Thompson, visiting anaesthesiologist, Dr Anson Moise and a local team of doctors, including orthopaedic surgeons Don Gilbert and Dean Wright.

"All seven have been waiting in the clinic for surgery in excess of 18 months, but were unable to afford the implants which cost from J$250,000-J$350,000," revealed Dr Gilbert.

After two days in the operating theatre, Dr Thompson and his team were only able to do three operations, owing to the long hours and intricacy involved in performing the surgeries.

Coupled with pre-existing medical conditions, such as hypertension, the other patients were rebooked for other dates.

"Each of these patients have had severe osteoarthritis of the hip, which made walking painful," explained Dr Gilbert.

He said their condition stemmed from trauma from motor-vehicle accidents, to rheumatoid arthritis and vascular necrosis of the femoral head, due to sickle cell disease or steroid use.

Joan Russell's situation had deteriorated to the point where she started going public, asking persons for financial donations towards her operation.

"I kept wondering if there was any other choice, other than living with this pain," she said from her hospital bed.

Like Russell, 61-year-old Adasma Williams of Grange Hill, Westmoreland, says issues with her right hip have changed the look of her body and she now walks with a limp. "One side of my body is longer than the other, and the most painful exercise is trying to get up and walk."

"The minute I get up, I am in trouble," said Williams, who has been suffering for eight years, with her condition worsening every year.

They are the Cornwall Regional Hospital, which serves western Jamaica, the University Hospital of the West Indies and the Kingston Public Hospital.

"We (Cornwall Regional) are the only hospital in this area currently offering total hip replacements, publicly, and so, patients come from the North East Regional Health Authority, which covers the north-eastern parishes of St Ann, St Mary and Portland," states Dr Gilbert.

It was the desperation of these poor people, not only in Jamaica, but areas such as New York, that spurred Dr Thompson into action.

Comparing the Jamaican situation to the New York communities, Dr Thompson said, "By the time they reach us (doctors), their problems are so bad, it becomes extremely challenging to treat. Just because they can't afford proper health care."

Dr Thompson's philanthropic effort was not void of bureaucratic red tape, and he had serious challenges getting approval for the implants that cost US$15,000 each and the importation of the equipment used in the operation.

"The equipment, which is being returned to the US, is valued at US$700,000," Dr Thompson told The Sunday Gleaner.

He said each patient is required to remain in hospital after the operation for between four and five days.

Dr Thompson will return to Jamaica at the end of January to do follow-up treatment.