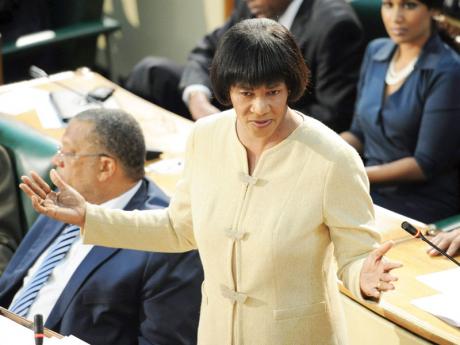 FOR TWELVE months I held my breath and waited for the government to tell me the details of the negotiations with the International Monetary Fund (IMF), and right now, to avoid asphyxia, I had to come up for air. The problem is that is all I got, because with the exception of a lot of carbon dioxide of the hot type, there is little that went on in the past year to tell me that my country is heading in the right direction.

Now, we know that the Jamaica Labour Party (JLP) ran the country for four years between 2007 and 2011 and that is passé. Apart from the debacle involving the entire Dudus saga, the JLP's performance was distinguished by overall poor economic results. Between 2007 and 2011 the economy shrank with economic growth levels of -0.6 per cent for 2008, -2.8 in 2009 and -1.1 for 2010 before finally turning slightly positive in 2011 with 1.5 per cent.

On the human side, the JLP successfully reversed the progress and got an increase in unemployment levels from a low of 10 per cent to reach just about 13 per cent in 2011. Poverty, despite the protestation of the JLP over the timing of the release of the 2010 figures, did grow under that party, from around 10 per cent in 2007 to about 20 in 2011.

Ok, now Comrades, you just got some unpaid free media work. Now, let us see what you have to say for yourselves. After all, it is the dissatisfaction with the JLP and the promises made by the Peoples' National Party (PNP), that made the electorate vote them out. And perhaps the pundits and apologists don't realise, but the Labourites are no longer in charge and anything that went on since 'Andrew call it,' is squarely the PNP's responsibility.

In its Manifesto of 2011 the PNP committed itself to restoring trust and transparency because it "is opposed to all forms of corruption, whether in public or private life and the implementation of measures to effectively deal with this very serious issue." True, the police have been given unfettered freedom to act without political interference. Indeed, the police have been continuing their good work with limited resources and the country has seen a reduction in the homicide rate across the past few years and administrations.

National Integrity Action (NIA) asked the government to follow through with its words by "the strengthening and transformation of Jamaica's anti-corruption institutions ..."plugging legislative loopholes which facilitate corruption. For example, the laws giving effect to campaign finance regulations, impeachment of officials who betray the public trust ... ." Yet NIA laments that, "in December 2012 there remains no certainty that the solemn pledges shall be honoured, nor has (sic) there been any decisive steps to initiate nor conclude prosecutions of persons who hitherto have enjoyed impunity."

And what of the economy? Uncle Sam's greenback is beating the hell out of Bustamante's face, with a runaway rate of more than US$1.00= J$92.00. A drop of J$6.00, this is a worse change than the J$3.00 slide the JLP had in its first year in office. As for economic growth, a year after it took office the JLP's 'Man a Yard' steered the driver, loader man and passengers to negative growth with a rate of -0.6. Now Jah Peter drove us to a sliver of a per cent growth in this year.

It's PNP time and the NIR were $1.1 billion in October 2012. When the Labourites were shaken out for their New Year's gift, they left $1.96 billion and within three months it had been sucked out to shrink to $1.77 when the financial year ended in 2012. You decide what those numbers mean.

And what about employment? Despite the Jamaica Emergency Employment Programme (JEEP) which artificially depresses the data, Jamaica's unemployment rate is still an unimpressive 12.8 per cent. At 12.8 in October 2011, it was doubtless worse than the 10  per cent PNP left in 2007. Nonetheless, at 14.1 per cent last April and reduced by the temporary impact of JEEP, there is nothing to pin medals on for. One should note that the total number of persons working fewer than nine hours per week in January 2012 was 49,700. In 2011, 20,000 fewer persons were underemployed, with 29,100. In fact, when the PNP took over, only 16,200 persons were this critically underemployed.

Even if we use the unmitigated rate of 12.8 per cent from the last Labour Force Survey, all the PNP did was break even with the Labourites.

In the past year, some jobs were lost and some gained. Manufacturing lost more than 5,000 workers; a bad sign for any export-oriented nation. Some 6,300 household workers are now forced to help themselves. And, the financial sector jettisoned 3,000. However, workers in wholesale, other stores and garages increased by over 15,000, and tourism and restaurants got close to 3,000 new workers. Nevertheless, I have consistently pointed out that work in these industries is mostly unprotected and socially dangerous. As far back as 2000, the point was made several times in full audience of government and opposition members of parliament and trade unionists, that the thrust towards unprotected work would have fuelled the rates of societal violence.

When one looks on the labour force on the whole there is no reason at all for chicken to be merry. Youth unemployment is dangerously high, with 46.3 per cent of the 'shotta-in-training' age group of 14 to 19 being jobless. In contrast, the rate under the JLP for the same period last year was 43.1 per cent. For youth between 20 and 25 years old, the figure is 29.3; under the JLP it was 25.2.

For years from the 1980s to 2000s, respective governments failed to pass laws to adequately protect non-unionised and contract workers. Apart from the porous amendment to the Labour Relations and Industrial Disputes Act in 2002, the PNP did nothing in this regard. It took the JLP's Pearnel Charles, using the black side of his head, to pass two pieces of law which modified the imperilled status of Jamaican workers. In this single area, the PNP loses big time to the JLP.

It is uncertain how the PNP apologists will evaluate their party, and we know what the JLP will say. However, standing in the middle, the PNP's 2012 mark sheet would not be a success. Indeed, if this were another forum they would get F.