PHILLIPS: No reason for panic 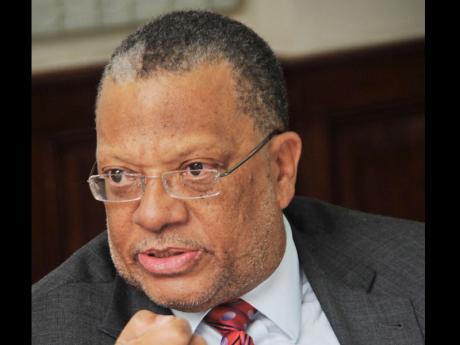 Finance Minister Dr Peter Phillips has finally admitted the least well-kept secret in the country: Jamaica will not sign an agreement with the International Monetary Fund (IMF) this year.

But Phillips remains upbeat that an agreement will be in place shortly, even as he rejects suggestions that he has remained much too quiet on the state of the negotiations.

Under pressure from an unrelenting Opposition demanding details of the proposed IMF deal, Phillips yesterday issued an extensive release.

This followed an interview with The Sunday Gleaner late last week.

In his release yesterday, Phillips said the discussions with the technical staff at the IMF were almost complete.

He said in light of the Fund's negative assessment of the world's economy, "there is a need for Jamaica to programme steeper debt reduction and buffers in order to maintain a robust downward trajectory in the debt ration to 2020".

Said Phillips: "The last issues on which we are now actively focused include the approach and timetable for a comprehensive policy on tax waivers and incentives, safeguards against fiscal slippages … and the examination of even higher primary surpluses in the medium term."

The finance minister also admitted that after the negotiations close, there will be prior actions to be undertaken by the Jamaican Government, subject to the approval of the Cabinet.

"The completion of these will determine the timing of the IMF board's approval," said Phillips in a further signal that a deal could be some time away.

In the Sunday Gleaner interview late last week, Phillips had argued that the time being taken to reach an agreement with the IMF was not unusual.

"There are complex and weighty issues at stake which will determine the future prospects of our country," said Phillips in his release yesterday as he reinforced the point.

NO REASON FOR PESSIMISM

"There is no reason for pessimism - none at all," Phillips added in response to concerns expressed by members of the private sector who have grown sceptical as a result of the failure of the previous Jamaica Labour Party administration and the current Government to provide clarity on the IMF talks.

"I think I have communicated more frequently than was done by the Opposition about the state of the negotiations," asserted Phillips.

"We have, at every point, given information as to what is happening. We have spoken in the Budget Debate, we have given regular updates in the Parliament, and, certainly, we have given more updates in the period of negotiating this programme than was given in the whole period of the collapse which took place in March 2011 … . In that nine months, there was nothing said."

After that jab at the Opposition, Phillips stressed that he was not keen on treating the matter as a political tug of war.

"I think the country has to face some issues, but we can't negotiate it in the public.

"There is no basis for any notion that there will never be any agreement; that is just something intended to create doubt and chaos in the marketplace," said Phillips.

"Even as we issue this update, negotiations are continuing with the IMF to arrive at an agreement that is beneficial to the people of Jamaica."

In the meantime, Phillips is upbeat about Jamaica's economic prospects for 2013, even as he notes that it will be challenging.

"I see a year when we will be making adjustments and set the economy on a firm footing to meet not only our obligations, but I think there will be more of the positive growth projects getting under way and we will be in a (better) situation.

"As we have seen already, there are many bright spots in the economic landscape and I think we will see more of those."