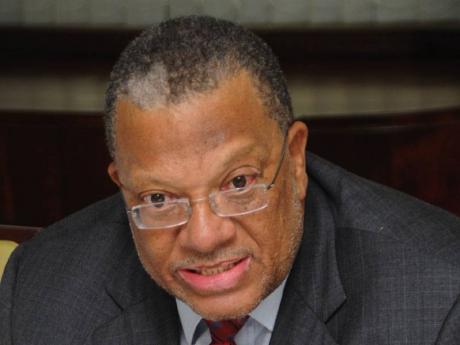 SOME OF Jamaica's business leaders have cautioned that there could be tough times ahead as a result of the delay in the signing of the agreement with the International Monetary Fund (IMF).

However, they said persons should not panic, but instead throw their support behind the Government to help the country weather the storm.

The leaders' call came a day after Finance Minister Peter Phillips admitted that Jamaica would not sign an agreement with IMF this year.

In a release last Saturday, Phillips said the discussions with the technical staff at the IMF were, however, almost complete.

Christopher Zacca, president of the Private Sector Organisation of Jamaica, said confidence in the country would continue to slip unless the IMF deal is dealt with quickly. He called for the Government to better involve private-sector groups in the negotiation process with the IMF.

"There is a feeling of helplessness in the private sector because we have no sense of what the nitty-gritty details of the sticking points are and how far away we are from the IMF in the various positions.

"If we are to continue to support the government team, it is full time that they share these nitty-gritty details at whatever levels of the private-sector leadership that are appropriate," he said.

He pointed to other Cabinet ministers, saying that as members of Government, they should better support Phillips and the IMF negotiating team.

"We think the entire Government needs to have a strong show of support to back up Minister Phillips and his team. We are not getting enough of different Cabinet ministers coming out and speaking about the need for fiscal discipline," he said.

Brian Pengelley, president of the Jamaica Manufacturers' Association, said additional tax measures are not to be seen as one of the solutions to better the financial standings of the country.

"There is no room for additional tax measures. We are very firmly of the opinion that the economy cannot take any more taxation, so the focus must be on cutting cost, waste and other things," he argued.

Pengelley also said there needs to be more support for Phillips and his negotiating team if the country is to be successful in the agreement.

President of the Jamaica Chamber of Commerce, Francis Kennedy, in indicating that the delay is worrying, blamed the previous government for the current predicament.

"It is a tough situation, but the key thing is that we cannot panic, the Government wants an IMF agreement, all of us should just tighten our belts and back the Government and get them to negotiate an appropriate agreement," he argued.

But Professor Rosalea Hamilton, president of the Micro, Small and Medium Enterprises Alliance, said the delay came as no surprise to her based on the available information about the IMF talks.

She signalled that it is far from being favourable news for the economy.

"Further depreciation of the dollar is likely to continue mainly due to our incapacity to earn enough foreign exchange in global markets to meet our demand for foreign goods and services.

"As the economy worsens, this incapacity will also worsen as businesses, especially micro and small businesses, will find it more and more difficult to survive and expand their outputs and exports."

Meanwhile, Opposition Spokes-man on Finance Audley Shaw has described the announcement by Phillips that an agreement would not be met with the IMF as "absolute dishonesty and deception".

But an upset Shaw, who has been indicating that the deal would not be possible this year, said the minister should be transparent.