'Holiday' over for persons with unpaid traffic tickets - SSP Lewis 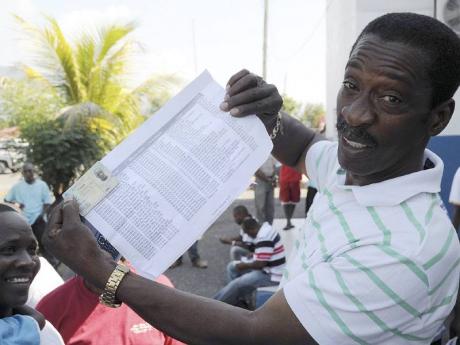 Senior Superintendent of Police Radcliffe Lewis shows the number of outstanding tickets one motorist has. Hundreds of motorists turned up at the traffic headquarters in Kingston yesterday ahead of today's traffic-ticket amnesty deadline. - Norman Grindley/Chief Photographer 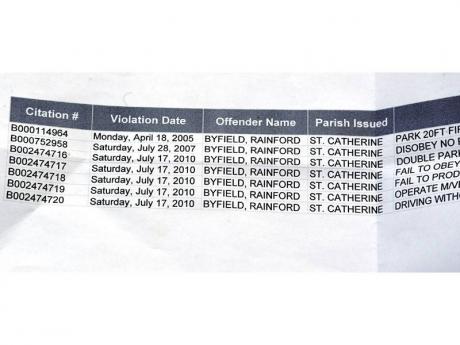 A motorist says he can't recall getting five tickets in one day as stated on this printout. - Norman Grindley/Chief Photographer
1
2

AS MOTORISTS scurry to take advantage of the traffic-ticket amnesty, which comes to an end today, head of the Police Traffic Division, Senior Superintendent Radcliffe Lewis, has cautioned persons who have accumulated excess tickets that were issued outside of the amnesty period to come forward and pay up or face the full brunt of the law.

"Come Tuesday, those persons who have outstanding tickets from September 21 (2010) until now are going to be arrested same way, just like those persons who are on the amnesty and refuse to pay. They were never out of the loop," Lewis told The Gleaner yesterday.

The traffic cop, who The Gleaner caught up with at the Police Traffic Headquarters yesterday where scores of persons queued to query their tickets, said at the start of the amnesty, a decision was taken to refrain from arresting motorists caught with excess tickets.

However, yesterday Lewis warned that the 'holiday' period is now over for those outside of the amnesty.

"The only reason why we suspended arrest for those persons was that we didn't want any mix-up with the persons on amnesty. We made sure that we suspended (arresting) anybody for warrants and tickets," he said.

The six-month amnesty, which took effect on July 1, is for persons who were issued tickets before September 21, 2010. National Security Minister Peter Bunting has charged that there would be no extension of the amnesty despite calls coming from several motorists.

Yesterday, the call for an extension of the amnesty was still present on the lips of those gathered at the traffic headquarters on Elletson Road, where they had gone to rectify tickets they claimed to have paid off, but unable to find receipts.

Rainford Byfield, a taxi operator who was issued a sheet of paper showing a list of outstanding tickets accumulated since 2005, said although he cannot recall being fined for most of the offences shown on the sheet of paper, he was willing to pay them off if given an extension.

"A 40 years me a run taxi and me nuh have no other livelihood. A extension woulda good," he said.

His strip of paper showed that on July 17, 2010, he accumulated a total of five traffic tickets in a one-day period, but he was adamant that there was no such thing.

The complaint was similar for George Feurtado who was clinging to a sheet of paper showing where he was owing over $60,000 in outstanding tickets.

Yesterday, Lewis disclosed that bus operators have come up on the police radar as those owing the most money in tickets.

Asked what would be the plan of action come tomorrow morning when the amnesty expires, Lewis said: "I have my plan but, my plan, I will not unleash until Tuesday. I know a number of persons are going to be caught flat-footed and surprised."

"The fact is this money that is owed is money owed to the Government for more than a decade and this money will have to be paid. We not asking and we not begging, it has to be paid," Lewis charged.

Over $2.5 billion is owed to the Government in outstanding traffic tickets.