The Russians are here 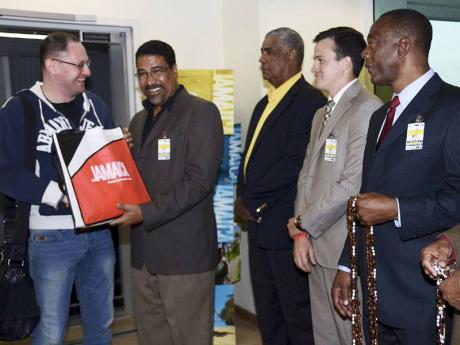 From left: The first passenger off the Russian carrier Transaero, Sarokin Igor, is met by Minister of Tourism Dr Wykeham McNeill; Director of Tourism John Lynch; head of the Consular Section at the Russian Embassy, Andrey Dryakin; and Mayor of Montego Bay Glendon Harris. - photo by Janet Silvera

The flight, a boost to the winter tourist season, landed at the Sangster International Airport in Montego Bay, St James, with 320 passengers aboard from Moscow, Russia.

In a welcome ceremony at the airport, Minister of Tourism and Entertainment Dr Wykeham McNeill reiterated the importance of airlift to the survival of the island's tourist industry.

"The arrival of this flight has again signalled that our efforts to boost airlift and open up new markets continue to bear fruit," he stated.

"The start of this flight service has been long overdue and now we can truly say 'the Russians are coming'," he quipped.

McNeill said the new gateway opens up a new market for Jamaica, one that will allow thousands of Russian nationals to enjoy a Jamaican vacation. It also provides the opportunity for Jamaica to intensify its efforts to attract visitors from this very important market.

Excited about the prospects, the tourism minister credited Transaero for bringing together two worlds and two cultures.

The flight will run until October, five months more than initially intended. Plans are also in train to extend the schedule to at least the end of 2013.

Transaero flies to 40 countries on 130 routes and has hubs in Moscow, St Petersburg and Yekaterinburg. The airline operates flights between Moscow and Belorussia, Ukraine and Uzbekistan. It also operate flights out of other countries such as Austria, Cyprus and Greece.

Transaero will be operating these charter flights in partnership with tour operator Biblio Globus.

On hand to meet the aircraft were head of the Russian Consular Section in Jamaica, Andrey Dryakin; chairman of the Jamaica Tourist Board, Dennis Morrison; Director of Tourism John Lynch; Mayor of Montego Bay Glendon Harris, and Carrole Guntley, director general in the tourism ministry.

Dryakin told The Gleaner that this flight was not only a great contribution to relations between the two countries, but also a significant step in developing Jamaica's tourism.

"Some 25 million Russians travelled worldwide last year; we hope Jamaica will be opened as the new market for our country," he said.