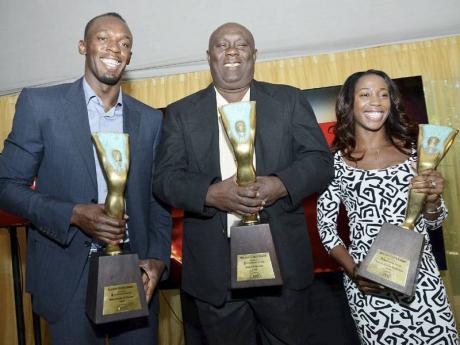 Racers Track Club head coach Glen Mills, for the second consecutive year, copped the Coach of the Year Award to bring his tally of winnings to three, having also won in 2007.

Mills is responsible for conditioning Bolt and Yohan Blake, who captured gold and silver, respectively, in the 100m and 200m at the London Olympics, as well as Warren Weir, who followed Bolt and Blake home in the 200m to earn Jamaica a clean sweep of the medals.

"I am very pleased as it is always good to be recognised," Mills shared. "I think we had a great year and the results were astonishing; there were a number of firsts and a number of achievements, although they weren't gold medals."

The Howard Aris Award, which was established last year in memory of the late former JAAA president - to recognise athletes who represent the country with distinction in non-traditional events - was captured by 2012 World Junior discus champion, Fedrick Dacres, and 2012 World Junior 400m hurdles champion, Jeneive Russell, who was not present at the function.

The athletes received scholarships valued at $250,000, tenable at the University of the West Indies, University of Technology or GC Foster College.

"It is a great feeling and it is good to be recognised as I trained real hard," Dacres said, pointing out that he wants to study political science as he intends to venture in to the field of law.

Bolt became the first man in history to successfully defend the 100m Olympic title, after his 9.63 seconds clocking to win the final. He went on to post 19.32 seconds to capture the 200m and anchored the men's 4x100m relay team to gold in a world record 36.84 seconds, to become the first person in history to win the three gold medals at two consecutive Olympic Games.

Bolt was naturally delighted at winning his third Golden Cleats Award, having won in 2008 and 2009.

"I feel great," Bolt said. "It is always good to be recognised in your country, because I am recognised all over the world."

Fraser-Pryce in 2012 joined elite company, as she became the third woman in history to repeat as 100m Olympic champion, after stopping the clock at 10.75 seconds in the final.

Doubling for the first time at a major championship, she added silver in the 200m with a time of 22.09 seconds and helped the sprint relay team to the silver medal in a national record 41.41 seconds.

"I have to give God thanks for everything that happened last year," said Fraser-Pryce, who was winning her second Golden Cleats Award following her success in 2009.

"It was a long year, as it was my final year in college, but it was a very important year for me as I wanted to repeat my title and I wanted to win," she added.